The last words of a dying bride 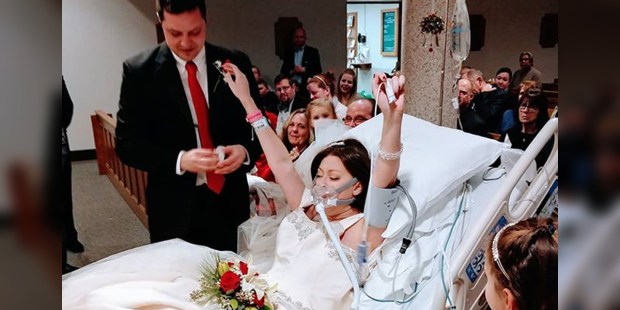 Heather Mosher was determined to reveal her love for her husband before she breathed her last.

Nearly one year ago, on December 23, 2016, Heather Mosher from Connecticut experienced a most bittersweet day. After receiving the devastating news that she had breast cancer, her boyfriend, David Mosher, took Heather on a horse-drawn carriage and proposed to her under a street light.

David described the couple as being “inseparable” after they met at a swing class just over a year and a half ago and explained: “She didn’t know I was going to propose that night, but I said to myself, she needs to know she’s not going to go down this road alone.” Sadly, five days later the couple received the news that the cancer was “triple negative, one of the most aggressive forms of breast cancer.”

Over the following year, Heather battled the disease with David at her side. As he shared with WFSB, their lives became “consumed with cancer.” Despite her fighting spirit, the couple discovered that the cancer had spread to her brain and within a few months Heather had to go on life support to help her breathe. “She was tough. Anyone else would have given up a long time ago. The doctors even said we don’t know how she’s still here,” David said.

However, cancer was not going to beat the couple’s love and desire to marry. Although they had planned to exchange vows at Plantsville Congregational Church on December 30, doctors quietly advised David to move the date forward. So on December 22 the couple said their vows in front of their family and friends at the hospital’s St. Francis chapel.

Heather chose to spend her last hours celebrating surrounded by people she loved and who loved her. How do I know God is real? Because He was filling her with joy despite the fact that outwardly her body was failing. She chose to let God carry her, instead of wasting her last hours angry at him for allowing this illness. And carry her he did. He carried her home.

“We were losing her as we were all standing there, thinking, to hold onto this, because this was the last she had to give,” Heather’s bridesmaid, Christina Karas, shared. Luckily, through the emotions, Karas was there to capture the poignant moment when the bride stretched out her arms with pure joy; jubilant in being able to declare her love for the man who didn’t abandon her in her time of need. “The last words she said were her vows,” said Karas.

Earned her wings! One of my dearest friends got married this past Friday, December 22nd, to the man of her dreams. She had been battling stage 4 cancer and it had spread all throughout her body, but she was determined to marry her soul mate. Less than 24 hours later her spirit flew from her body and ascended to be with God. I am in awe of the strength Dave's love inspired in Heather even in her last hours. She was his great love and he was hers. Heather, I miss and love you more than I can say. Thank you for sharing this life's journey with me. ❤️

Standing in front of everyone in the chapel, I was hesitant to pull out my camera. As someone who wanted nothing more than to see my friend truly happy, I felt I had to capture these images, which by this point I knew were her final moments with us. What you clearly see here is two people who were destined to be joined as one. A love like no other captured for all to see. My gift to her.

The stoic groom proclaimed: “She’s my great love, and I’m going to lose her, but I’m not losing her forever.” Just 18 hours later on December 23, a year to the day she became engaged, Heather died a married woman. As David shared: “She was able to fight ’til the end, I’m going to fight until my end.”

Of all the photos this one breaks my heart the most. He was longing to have a chance to build a life with his bride, but knew she had to say goodbye. He wished more than anything to take her pain away. But knew the only way her pain would end, was if her body finally gave up the precious life within. I cry as I write these words.

Heather’s story is what a wedding is all about. Not an expensive dress, flowers, and the perfect venue, but declaring your love and commitment to that someone special, and showing them that you will be by their side as you navigate life’s journey together, no matter how long, or short.

Read more:
How one dad made sure his daughter knew his love … long after he was dead