What does the Bible say about refugees? 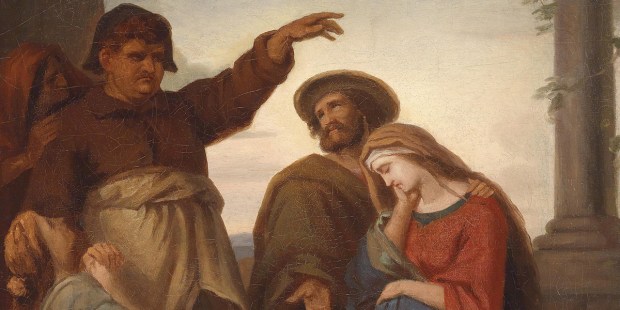 Jesuit Alberto Ares explains the idea of hospitality in the Christian tradition.

More than 232 million people (equivalent to one fifth of the most populous country on the planet) are migrants. More than 65 million of those people have been forced to abandon their homes due to armed conflict, generalized violence, or a natural disaster. Of that number, 21 million are refugees; 38 million are displaced within their countries; and 3.2 million are seeking asylum.

The Mediterranean has become the largest cemetery in the world, where, in 2016 alone, more than 5,000 people lost their lives. Syria is the country that generates the largest number both of refugees and of internally displaced persons, followed by Afghanistan, Somalia, and South Sudan.

In his booklet “Sons and Daughters of a Pilgrim: Towards a Theology of Migration” (which can be read in its entirety in Spanish at this link), published by Spanish publishing house Christianisme i Justícia, Jesuit author Alberto Ares explores the Bible, Tradition, and the Magisterium to illuminate the situation of refugees from a faith perspective. In this article, we present his findings from the Bible; a later article will deal with the teachings of Tradition and the Magisterium.

Alberto Ares is a Spanish Jesuit who is an expert on the topic of migration. He has accompanied migrant communities in various parts of the world. Currently, he’s the Delegate of the Social Sector of the Jesuits in Spain, and a researcher associated with the Institute of Studies on Migration of the Pontifical University of Comillas in Madrid.

The Bible and refugees

According to Ares, the Bible is recognized as describing a reality in movement, with experiences of migration, exile, welcoming, and hospitality, which are part of the foundational experiences of the Chosen People: “My father was a refugee Aramean” (Dt. 26:5).

The New Testament, in which Jesus Himself appears as a migrant, “puts special emphasis on welcoming and on fraternity, on universalism and on an apostolic life in movement that overflows borders.”

The Old Testament: “My father was a refugee Aramean”

Ares explains how the Old Testament offers abundant doctrine and praxis regarding migration and people in transit. On one hand, emigrants, together with widows and orphans, constitute the typical triad of the world of the marginalized in Israel. God asks that they be treated with dignity and with special respect and attention.

• “You well know how it feels to be an alien, since you were once aliens yourselves in the land of Egypt.” (Ex. 23:9)

• “You shall treat the alien who resides with you no differently than the natives born among you; you shall love the alien as yourself; for you too were once aliens in the land of Egypt.” (Lev. 19:34)

• “When you reap the harvest in your field and overlook a sheaf in the field, you shall not go back to get it; let it be for the resident alien, the orphan, and the widow” (Dt. 24:19).

The New Testament: Jesus, the migrant

One of the central elements of the New Testament seen from the perspective of migration, Ares reminds us, is the fact that Jesus Himself is presented as a migrant. The Gospel of Matthew shows the infant Jesus and the entire Holy Family suffering an initial, bloody experience of forced migration (Mt. 2:14-15). The Gospel of Luke, in turn, narrates the birth of Jesus outside the city because “there was no room for them in the inn” (Luke 2:7).