Iraq’s Mar Behnam monastery: Rebuilding what ISIS could not destroy

For centuries, Catholic Syriac monks have been the faithful guardians of the tomb of Mar Behnam, a symbolic site for Christian prayer and pilgrimages, situated between Mosul and Erbil.

For over 1,700 years Christians have been the indisputable sons of Iraq. Contrary to the wild imaginings of ISIS, their presence largely preceded the Islamic conquest. Christians, who were evangelized very early on by St. Thomas, set about forming a church straight away. One of these early Christians was Mar Behnam, a legendary saint who was one of the first Assyrian princes to convert to Christ. He initiated his people in the teachings of Jesus before being martyred by his own father. For centuries Catholic Syriac monks have been the loyal guardians of Mar Behnam’s grave, up until the invasion of the Islamic State in 2014. In the past two years the Jihadists took over the monastery as their headquarters which has – as a fortunate consequence – allowed the site to be preserved.

However, all the Christian symbols have been beaten, broken, and removed. All the inscriptions in Syriac or in Aramaic have been deliberately scratched off. “Daesh [ISIS] has destroyed anything that could resemble a cross” confirms Faraj-Benoît Camurat, president of Fraternity in Iraq. Even the faces of the monks, legendary saints, and innocent animals have been chipped away. ISIS, in its iconoclastic madness, wanted to eradicate the symbols of any Christian presence in Iraq, doing away with its past, a well-known totalitarian refrain.

Before fleeing, the Islamic extremists tried to blow up the monastery in vain … the 19 bombs timed to go off failed to explode. However, Mar Behnam’s tomb was badly damaged. It represented everything that the Islamic state abhors: firstly, the veneration of saints, but also its unifying place of pilgrimage. Mar Behnam, an Iraqi saint, was undoubtedly a source of inspiration for Christians through the centuries, as well as for Yezidis and Sunnis who continue to pay homage to him. For Isis, this represented a scandalous spiritual crossroad which perverted Muslim piety.

Today, the monastery’s church is still standing. The magnificent 12th-century edifice shelters a cupola of the Virgin Mary, unique in the whole of the Middle East, featuring ceramic fragments with prayers written in Aramean that blend with the sun’s hypnotic rays, which lead inexorably to God. “A splendor … ” quietly concludes Msgr. Petros Mouché, Archbishop of Mosul.

The famous tomb of Mar Behnam can be found 50 meters further from the church. The octagonal room has been left open to the skies, with its cupola being reduced to thousands of pieces. Two tunnels, which remain very fragile, lead to the tomb itself. To enter, one must bend down as in an act of humility.

It’s now time to rebuild the heart of the tomb. Around 20 Iraqi laborers are busy finishing off emptying out the fallen rocks. Guillaume de Beaurepaire, a young French architect and member of the Fraternity in Iraq, is supervising this historic building site. “After having cleared out more than 600 cubic meters of rubble, in which remnants of statues, finely-crafted crosses, the imposing slab that covered Mar Behnam’s tomb, and votive offerings are mixed in, we are now going to rebuild the cupola.” De Beaurepaire and his team are basing their work on an old picture of the tomb taken in 1910 that was kindly lent to them by the department of archaeology in Mosul.

For the moment, the tomb remains without a roof. The white limewashed walls surround the few pilgrims who’ve come to pray; the alcove, where saints Mar Behnam and Sarah rest, is made of marble from Mosul. It’s reminiscent of the creche in Bethlehem: humble and bare.

For the Christian community, the road ahead is still long. They must rekindle the devotion of the people surrounding this gem of a church, re-establish the ancient tradition of the pilgrimage, and rediscover the symbolic unity of the people surrounding this holy tomb. Mar Behnam will not rise in one day. Fraternity in Iraq wholeheartedly embrace these tough renovations. A building site costing $300,000. As for these Iraqi Christians, the monastery is, like the Cathedral Notre-Dame de Paris, the symbol and the splendor of their bi-millennium spirituality. 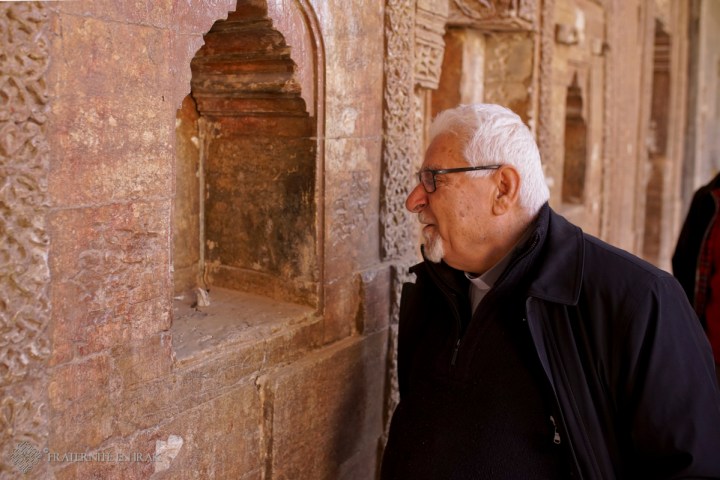 A report from Iraq by Maxime Dalle.