Is an icon in the elevator the pope uses every day inspiring his prayer? 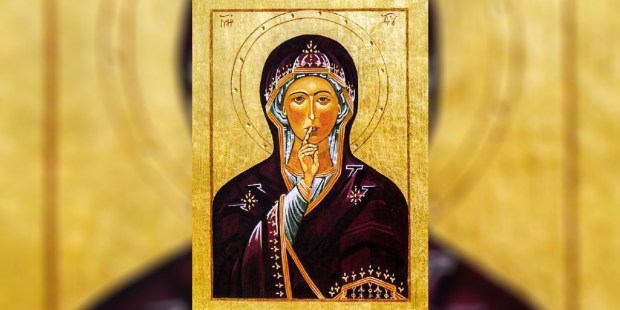 The Virgin Mary gives Francis a daily reminder on the need for silence, and it seems he’s taking note.

In the elevator used every morning by Pope Francis, an icon of Our Lady of Silence can be found. Made by the religious of Lake Orta, Italy, it seems that this Virgin has particularly inspired the Holy Father in his recent speeches.

The icon, inspired by a Byzantine image, represents the Virgin Mary holding her index finger to her lips. It was painted by the Benedictines from the convent of Mater Ecclesiae, on the island of San Giulio in the middle of Lake Orta, in the north of Italy, noted the Italian newspaper La Stampa on January 3.

The Virgin says no to gossip, explained the Pope in a speech last October 21 to visiting Brazilian seminarians, as this sin, which the pope says is a type of terrorism destroying a person’s reputation secretly, like a bomb, puts an end to priestly fraternity.

Then in the general audience of December 20, continuing his catechesis on the meaning of the Mass, the pontiff spoke of the importance of silence in the Eucharistic celebration. He urged the faithful to arrive early for Mass, and rather than chatting with a neighbor, to have a “moment of silence,” to prepare ourselves for the “encounter with Jesus.”

Finally, in his Mass on January 1, 2018, the pope strongly encouraged the congregation to take some time in silence before the Nativity scene, like the Virgin Mary, to allow Jesus “to speak to our heart.”

Read more:
Advice for 2018: Shut up about what you don’t really know