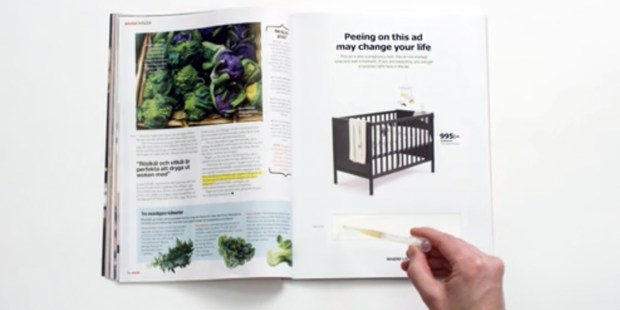 And if you ARE expecting, you get a discount on a new crib.

So here’s an odd — but arguably kind of genius — marketing ploy. Architectural Digest reports that IKEA has begun running a print ad in a popular Swedish women’s magazine that’s also a pregnancy test.

That’s right. The ad is for baby cribs and if you tear the piece of paper out and pee on it, it will tell you if you’re pregnant.

So how does that even work? According to the AD piece:

The tech was created with Marcene Labs and Åkestam Holst is running the advertisement in Amelia magazine, “one of Sweden’s most influential magazines for women,” the brand told Adweek. The agency also boasted that “technical advancements made during the work with this campaign have the potential to improve medical diagnostics,” so if we see breakthroughs in medicine in the next few years prepare to thank IKEA.

And if you do get a positive pregnancy result, a discounted “family rate” price will show for the crib and you can bring in the ad and get the discount.

The crib in the ad is called the Sundvik, and is listed on IKEA’s US web site for $119.00, before any discounts.

There’s no indication IKEA plans to run these ads in other countries, although perhaps if it does well, they’ll try it. The whole idea seems kind of gross at first, until you consider that you’ve got to pee on something when you’re trying to discover if you’re pregnant. This is a free test — minus the cost of the magazine — with a discount for a new crib, which is especially enticing to new parents who need baby stuff.

Read more:
How pregnancy forced me to abandon my immodest behavior