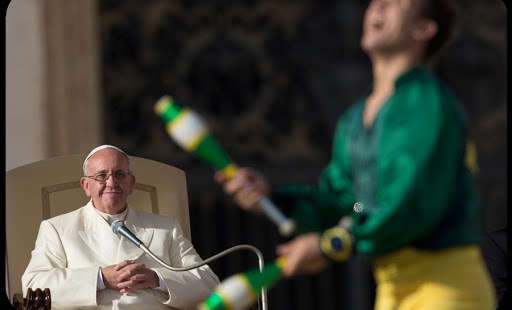 “God loves us and wants us to be happy.”

Pope Francis will be inviting some 2,100 needy people — including the homeless, a group of prisoners, low-income families and volunteers — to a circus on January 18, according to the Polish bishop in charge of the pope’s charity work.

The circus will be put on by Circo Medrano, which has donated its tent and artists for the initiative, called Circus of Charity for the pope’s poor.

The pope made a similar invitation in 2016, inviting the most needy of the Diocese of Rome.

The circus invite falls in line with other of the pope’s initiatives, such as having showers built for the homeless, and providing a barber shop and shelter adjacent to the Vatican.

The Bishop of Rome has noted how beauty affirms human dignity, and how the vocation of artists and entertainers such as circus performers is an exalted one. In this context, the offices of the papal charity have also organized concerts and visits to the Sistine Chapel.

Earlier this year, he told an association of performers: “God loves us and wants us to be happy. Wherever there is simple, clean joy, there is his imprint. If you keep these values – this genuineness and simplicity – you are messengers of the joy that pleases God and that comes from him.”

One moment of the pope’s encounter with circus performers is worth remembering. During a performance, the pope was invited to pet a six-month-old tiger (weighing close to 300 lbs) that was on a leash and drinking from a bottle. As the pope began to reach out his hand, the tiger “cub” turned his head and the startled pope jumped. Later on, Francis quipped that he is not the only pope to have been close to a big cat of such size.