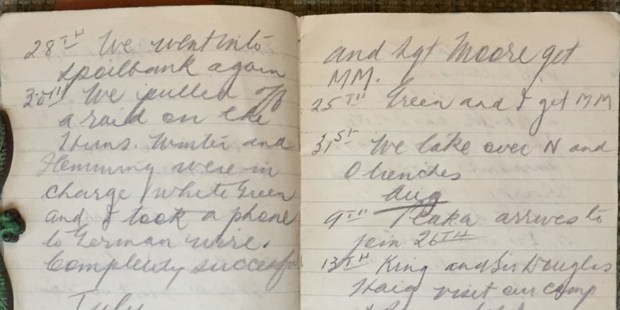 Family members of the author are transcribing the journals to make them available to all.

It was called “The Great War” and also “The War to End All Wars.” The horrors of World War I were so vast and unthinkable that society — at least until the advent of World War II — believed no further engagement between political enemies could ever again inflict such hell upon each other through guns and ammunition and aviation.

It was the danger from the sky, adding deadly dogfights and long nights of bombardment to the list of terrors, that truly changed the face of war, and helped advance ideas of chemical warfare, in the form of chlorine, phosgene, and mustard gas.

These were the hurdles through which Canadian Daryl Peters had to jump on a daily basis during his tenure with New Brunswick’s 26th Battalion, and thanks to the discovery of his war journals in Madison, Wisconsin, we will soon have a unique first-hand account of the “awful” conditions WWI soldiers faced.

The documents were discovered by his niece, Nita Regnier, who inherited the journals. They cover the span of the war, and are filled with grim depictions of muddy, corpse-strewn trenches, with three full pages of the names of Daryl’s fallen friends. Regnier says she was surprised and horrified by the discovery:

“I’m reading it with horror. A boy who was 18 and one month old is a child,” said Regnier.

“It was always very exposed, and mud up to their knees. He was this kid, with people in his dugout dead, killed and wounded. And him finding his way around them and doing what he could. That was three years of his life,” said Regnier.

During his time as a soldier Peters was awarded the Military Medal for Bravery and promoted to lieutenant. He was also “permanently invalided” (maimed) leading to a life-long limp, which forced him to walk with a cane.

The Regnier family is working to transcribe all of the journals and make them available to the public.