Pope Francis’ message on breastfeeding in the Sistine Chapel 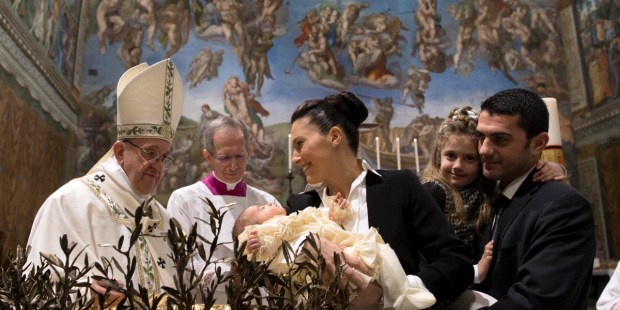 It’s not only natural; it’s “the language of love.”

The controversy around breastfeeding in public has been in the public eye for months, and this isn’t the first time Pope Francis has taken a stance on the matter. Last year, during the annual Baptism ceremony, Pope Francis invited mothers to breastfeed in the Sistine Chapel, reminding them that this is how Mary fed the Child Jesus.

This year, during the same annual Baptism ceremony, the pope has taken the opportunity to weigh in again, saying, “Babies have their own dialect. If one starts to cry the others will follow, like in an orchestra. If they start doing the ‘concert,’ it’s because they’re not comfortable. Either they’re too hot, or they’re not comfortable, or they’re hungry. If they’re hungry, breastfeed them, without fear, feed them, because that’s the language of love.”

Sadly, many women have faced criticism for breastfeeding in churches, but the pope’s remarks encourage us to remember the beauty and holiness of the female body as God intended it (and the importance of breastfeeding in that).