Honored by Pope Francis, this priest is a patron of the poor, street children, and social workers 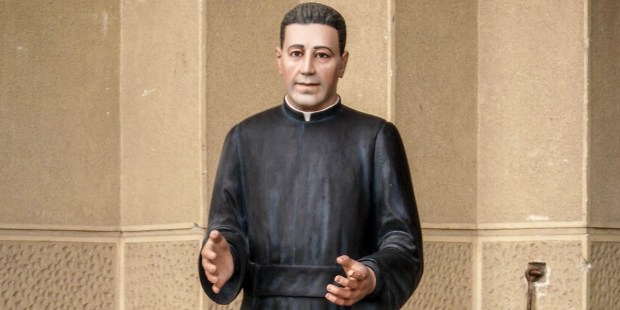 Chile’s second canonized saint is a Jesuit like the pope, and a national hero.

St. Alberto Hurtado, Chile’s champion of the poor, especially children, was honored by Pope Francis when the Holy Father visited his shrine on January 16. Father Hurtado was canonized on October 23, 2005, by Pope Benedict XVI, becoming his country’s second saint. (The first saint of Chile was the 20-year-old St. Teresa of the Andes.)

Alberto was born on January 22, 1901, in Vina del Mar, Chile. When he was four years old, his dad passed away, and his mom was left penniless. She was forced to sell the small amount of land they had in order to pay off their debts.

For the next several years Alberto and his brother were moved around, having to live with different relatives and friends as their mom could not afford to raise them by herself. Not having your own home and your own bed can be quite traumatic when you are a child. The constant insecurity affected Alberto deeply.

Alberto was quite bright, and when he was only eight years old, he was granted a scholarship to the upscale, highly regarded, Jesuit School of St. Ignacio in Santiago. He attended this school from 1909 thru 1917.

His father’s death and the insecurity of having no permanent home had been deeply ingrained in the young man. As a teenager, he felt a special bond  with the poor and impoverished and began working with them spending his weekends in the slums of Santiago. He also felt the call to Holy Orders.

After graduating from the Jesuit School of St. Ignacio, he entered the Catholic University of Chile. Here he began to study law, and he also continued visiting the poor every Sunday. His spiritual director at the time was quoted as saying, “He was incapable of seeing pain, nor any need, without seeking a way to resolve it.”

Marriage was something that Alberto seriously considered, but the “calling” was too great. He entered the Jesuit novitiate in 1923 at the age of 22. He immediately knew he had made the right decision. He wrote to a close friend, “Here you have me, finally a Jesuit, as happy and content as one can be on this earth.”

Alberto, while always squeezing in the time to work with the downtrodden, poor and marginalized, completed his Jesuit training, which included studying philosophy, theology, and full-time work. He was ordained to the priesthood in 1933.

In addition, he had won the admiration of his peers because of his happy nature, which was combined with kindness, charity, and prayerfulness. As a priest he began to teach religion at St. Ignatius and at Catholic University.

No matter where his journey would take him, the poor and needy and homeless would always be traveling with him. They were always on his mind. He continued working with the disadvantaged and in 1940 was appointed Director of Catholic Action, a national youth movement. He then wrote a book entitled, Is Chile A Catholic Country? It ruffled many feathers in the establishment.

In 1944, while directing a woman’s retreat, he told them of an experience he had a few nights earlier. It was a life-changing moment for Father, and he just had to express his feelings. He told them how a poor, sick man, dressed only in shirtsleeves, stopped him and asked him if he could help him find shelter. Then Father blurted out, “Christ is without a home!”

Silence filled the retreat center as the priest went on to tell them how Christ was roaming our streets in the person of the suffering poor, the sick and dispossessed, the children without fathers or with no mother to hug or kiss. Again he called out, “Christ is without a home!”  The women present gathered their resources and so began what Father Albert Hurtado is best known for: El Hogar de Cristo, Home of Christ.

In 1945 Father Hurtado visited the United States to study the “Boys Town” movement and to consider how it could be adapted to his own country. The last six years of his life were dedicated to the development of various forms in which El Hogar de Cristo could exist and function.

Homes were opened for children, for men, for women, for rehabilitation, and as trade schools. All had been inspired by the simple priest from Vina del Mar.

Read more:
The “gaucho priest” will be the first “real” Argentinian saint