What bishops can do for ex-Protestant clergy 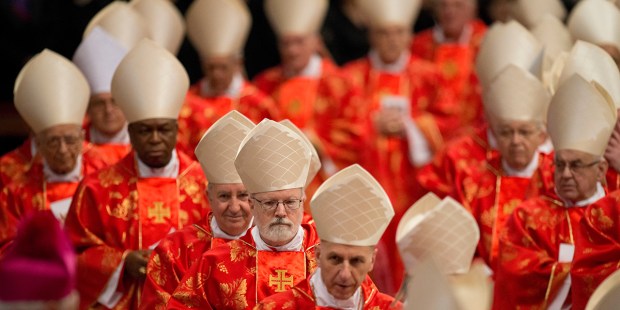 Male and female Protestant clergy who come into the church surrender much for “the Church of Christ best ordered through time.”

Richard John Neuhaus had it worked out when he left the Lutheran church for Rome. “The Roman Catholic Church is the Church of Christ best ordered through time.”

By “best ordered” he meant it had all the essential elements that made “church” Church. Equally, all the others lacked an essential something or two, something he sought for himself, nonetheless present in the Church of Rome. That was his final conviction and he acted on it. Numerous others are doing similar reflection. How hard can it be? Pretty hard.

Read more:
Former Lutheran Pastor: “Why I Am Becoming Catholic …”

One day, let’s say, the Protestant pastor is busy doing pastor stuff: preparing sermons, counseling, making parish and hospital calls, planning Sunday’s liturgy. He or she is swathed in the tasks of ministry, done in the call the pastor perceived from the Holy Spirit, the call that led him to seminary, to become a shepherd in the most elemental form of Protestant churches, a local congregation.

If he is any kind of decent pastor, being a pastor has come to occupy his identity and being. Even without an ontological understanding of priesthood, Protestant clergy know the office of pastor is more than mere function, more than hired work, and it carries a genuine grace. There is a gift that empowers and propels the work of ministry. Good pastors come to think of themselves, first, as pastors.

That’s one day. By the next day the pastor has resigned from congregational ministry, severed his or her denominational ties, perhaps with a modest severance, and is laying plans to be received into the Roman Catholic Church.

Protestant pastors leave both vocation and denomination entirely due to the rising conviction that Rome genuinely is “the Church of Christ best ordered through time.” That is what hurls a Protestant pastor off into the Catholic wilds as a layman. Same deal in the case of women Protestant clergy. The move to Rome in a woman’s case is a decided act of self-abnegation and perhaps a repudiation of Protestant feminism. I know a few who have done it. But male or female, it is very hard. The mental gymnastics are passing strange.

There’s no way to guess how many Protestant clergy come in annually. There are no statistics. Nonetheless, some recognition is due, I think. This means dioceses themselves might offer some recognition of the convert clergy experience.

Here’s what a bishop can do (warning: some intentional whimsy may creep in; you’ll have to sort it out). When a parish priest meets with a Protestant pastor who wants to convert, he should call the bishop’s clergy convert hotline. It goes without saying the bishop should have a hotline for such things.

Part of the reception might be for the bishop to gather these folks together, to hear their stories. But a moment to let them trace the progress of their move, to explain when they knew they could no longer remain Protestant and to do it among other ex-clergy is, I think, important. The Coming Home Network could be a place for that. For what it does, the Coming Home Network does very well, but, being largely internet based, there few local opportunities for such encounters. The diocese would seem a good place for introductions.

The bishop might conduct a prayer service, even a Mass, for them and their families once they have been received as registered members of a parish.

This next is strictly for Protestant clergy staining toward Rome. Understand, the sense of loss over pastoral vocational identity is real, and extends beyond issues of income. My wife confessed she missed telling new friends her husband was a retired Lutheran pastor; retired ex-Lutheran pastor didn’t seem to carry the same weight.

Most former clergy transitioning to Rome will not find church employment, and a degree in theology is worth approximately zero in secular circles. Do not expect to continue your ministry, not as it is, preaching and teaching and liturgical presentation. Even should you qualify for ordination there is formation ahead of you when you enter candidacy. You might trim a year or two off due to your previous theological training, but “Catholic” is a whole other way of thinking theology and the organic unity of the Church. That requires time and study.

If there is a divorce in your background, something true for more and more Protestant clergy, be prepared for a year or two-year annulment process. If your spouse had a divorce but no annulment (even if you have not), you cannot be received until you are in a canonical marriage. The parish priest is to be your advocate in the annulment process; if you are divorced and feeling the slightest nudge to the Catholic Church, find a priest now and talk.

But do not become Roman Catholic with the expectation of priesthood or anything else. Work out the right reason first, that of becoming Roman Catholic because that is where you will find “the Church of Christ best ordered through time.”

Do that first. Then the anxiety, aggravation, even no income, cannot and will not deter the work of the Holy Spirit. Place your dilemmas there. Be prepared for sacrifice, be prepared to pray “without ceasing,” but above all, never once count the cost.