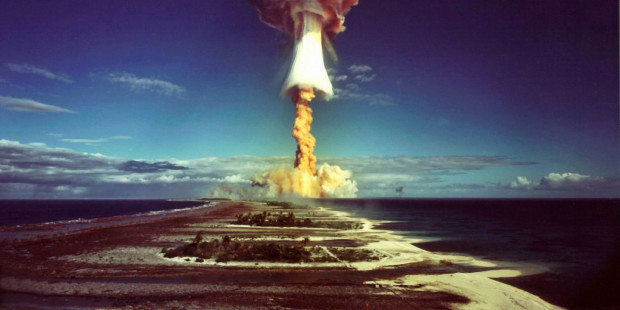 The idea of a nuclear catastrophe is not the invention of a Hollywood scriptwriter using the ironic pseudonym Robert Oppenheimer (“the father of the atomic bomb”). The nuclear age exploded permanently into our lives with World War II. Pope Francis knows that the horrors of Nagasaki and Hiroshima could repeat themselves.

An international symposium called “Prospects for a World Free from Nuclear Weapons and for Integral Disarmament,” organized by the Vatican’s Dicastery for Promoting Integral Human Development, took place last November 10-11, 2017, in the new Synod Hall, as a concrete sign of the true magnitude of the problem.

The Vatican symposium was not an attempt by the Holy See to mediate between the United States and North Korea, as was clarified by Greg Burke, the Vatican spokesman. Rather, it was an event planned in response “to the priorities of Pope Francis to take action for world peace and to use the resources of creation for a sustainable development and to improve the quality of life for all, individuals and countries, without discrimination,” confirmed the prefect of the Dicastery, Cardinal Peter K. A. Turkson.

As reported by Vatican Radio, this was “the first global gathering on atomic disarmament after the approval of the ‘Treaty on the Prohibition of Nuclear Weapons,’ signed by 122 countries … in New York on July 7, 2017, and opened to signature September 20th 2017, in the same city.”

The pope and nuclear catastrophe

The pope has alerted the world to what he condemns as a “piecemeal world war.” He is a leader who clearly speaks out on a series of related problems facing the world: terrorism, conflicts, extreme poverty, pollution, and the underestimated threat of nuclear war. Especially in the latter cases, he warns of the uncontrollable consequences of these dangers.

Furthermore, he has expressed his sadness at how much money is wasted on bellicose nuclear technology, considering the millions of dollars that could be better spent for human development: education, job creation, and health, among other things.

Francis is pushing with all the strength of the Holy See’s diplomacy for the complete elimination of nuclear weapons. This is clear from the key points of his message from March 2017 (see below), sent to the United Nations Conference on negotiating binding legal instruments for banning nuclear weapons.

The current global scenario is different from when the Berlin Wall fell; reportedly, the proliferation of nuclear weapons has been in decline since 1980. However, despite the fact that the overall number of nuclear warheads has been significantly reduced, there is a growing (although still small) of countries that possess this fatal technology and that are ready to use it.

The USA and Russia continue owning 93 percent of the nuclear weapons in the world. However, the world isn’t safe after the Cold War, since 14 countries possess nuclear weapons, including China, North Korea, Pakistan, India, Great Britain, and France.

Coincidentally, perhaps, while the Vatican was holding a discussion about a world free of nuclear weapons, U.S. President Donald Trump took a trip to Asia, during which Pyongyang and its nuclear threat were a dominant subject.

Japan, South Korea, China, Vietnam, and the Philippines: Trump visited five countries in 12 days, in the longest visit by an American president to the region in a quarter of a century.

Since 1991, the USA has protected its allies South Korea and Japan under a “nuclear umbrella,” consisting of nuclear-armed bombers and submarines ready to defend its allies. Since the beginning of that period, the new deployment of nuclear weapons has not been an option on South Korean territory (as it was for 33 years during the Cold War), because China and Russia would see it as a threat.

Thus, Trump’s visit to Asia was defined by the North Korean crisis. Kim Jong-un threatened new nuclear tests to demonstrate his military strength. India and Pakistan are also hot zones, due to old territorial disputes and mutual distrust. Trump hopes that China, under the direction of Xi-Jinping, will be an ally against Pyongyang.

In this scenario, Pope Francis has the status of a moral leader who can give visibility to the real possibility of overwhelming destruction, often toned down in discourse about Asia.

Paradoxically, the pope is the head of one of the smallest states in the world (just 109 acres), without nuclear weapons and without veto power in meetings of the world’s nations.

Nonetheless, example begins at home. Thus, on September 20, 2017, the Holy See signed the Treaty on the Prohibition of Nuclear Weapons, and in various speeches and interventions the delegates of the Vatican and of the Holy See pressured other countries to raise their consciousness of the problem.

For example, during the Conference of the International Atomic Energy Agency that took place in Vienna, September 18-22, 2017, Monsignor Bruno Marie Duffé, secretary of the Dicastery for Promoting Integral Human Development, emphasized the importance of the “moral responsibility of States” and the challenge of a “common strategy of dialogue” called for by Pope Francis.

Below, we present the three principal points that the Holy See is focusing on to encourage definitive and total nuclear disarmament, according to Pope Francis (March 23, 2017):

“If we take into consideration the principal threats to peace and security with their many dimensions in this multipolar world of the 21st century as, for example, terrorism, asymmetrical conflicts, cybersecurity, environmental problems, poverty, not a few doubts arise regarding the inadequacy of nuclear deterrence as an effective response to such challenges.”

“These concerns are even greater when we consider the catastrophic humanitarian and environmental consequences that would follow from any use of nuclear weapons, with devastating, indiscriminate and uncontainable effects, over time and space.”

“Similar cause for concern arises when examining the waste of resources spent on nuclear issues for military purposes, which could instead be used for worthy priorities like the promotion of peace and integral human development, as well as the fight against poverty, and the implementation of the 2030 Agenda for Sustainable Development.”

In the meantime, the symposium provided an opportunity to reflect on nuclear weapons in an international context and with respected experts, including the participation of 11 Nobel Peace Prize winners, representatives of the leadership of the United Nations and NATO, and diplomats representing various countries, including Russia, the USA, South Korea, and Iran.

In this context, the testimony of Masako Wada was particuarly significant. One of the last survivors of the atomic bomb in Hiroshima, he spoke in the name of the victims of nuclear weapons, as well as of all the other victims of nuclear tests.

Lastly, Pope Francis received the participants of the Symposium in the Clementine Hall of the Apostolic Palace on November 10, where he gave a speech on the subject. He pointed out that even the mere possibility of an accidental detonation of a nuclear warhead, let alone the prospect of nculear war, means that “the threat of their use, as well as their very possession, is to be firmly condemned.  For they exist in the service of a mentality of fear that affects not only the parties in conflict but the entire human race. International relations cannot be held captive to military force, mutual intimidation, and the parading of stockpiles of arms.” He ended his discourse on a hopeful note, saying that “progress that is both effective and inclusive can achieve the utopia of a world free of deadly instruments of aggression, contrary to the criticism of those who consider idealistic any process of dismantling arsenals.”