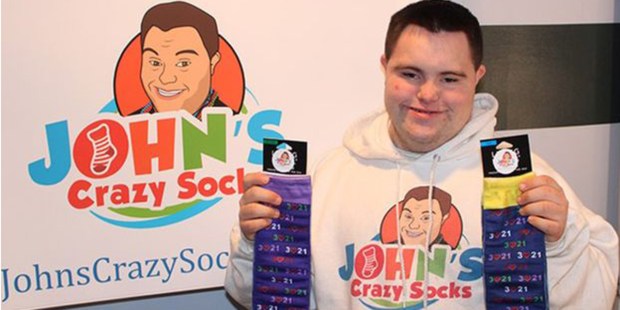 John Cronin and his father prove that one extra chromosome doesn’t need to stand in the way of dreams.

What is the main ingredient in setting up a successful million-dollar business? Well, if you ask John Cronin, who has Down syndrome, and his father, Mark X. Cronin (we can’t help thinking that ‘X’ is in honor of his son), they might tell you that it’s doing something that you love while thinking of others.

In a recent video made by the BBC, the pair talk about John’s desire to start a business with his dad after he graduated from school. And just like many father and sons who go into business, they sat down to discuss what they wanted to do — cue a very adorable father-son moment. With the onus being on fun, they decided to follow John’s lifelong passion and create an online sock business, aptly named John’s Crazy Socks, offering an assortment of 1,500 styles.

Yet, John wanted to add another personal touch to his company. Every order comes with a thank-you message and some candy, and if you happen to live in Long Island, you might be surprised to have the footwear entrepreneur knocking on your door to deliver your parcel in person.

The company has a staff of 12, including eight people with disabilities, and it donates 5 percent of profits to the Special Olympics. John also keeps busy by creating some “awareness socks” that raise money for good causes. “We’re creating happiness through socks,” he says, with a big grin on his face.

And he’s not the only happy businessman. In one exceptionally sweet part of the video, John’s father tenderly shares how they both “need each other” and that he couldn’t run the company without his son by his side. A gleeful John, cuddling up to him, says: “Down syndrome never holds me back.” To which we say, keep socking it to us, young man!

Read more:
Meet the woman with Down syndrome who just competed in Miss Minnesota USA