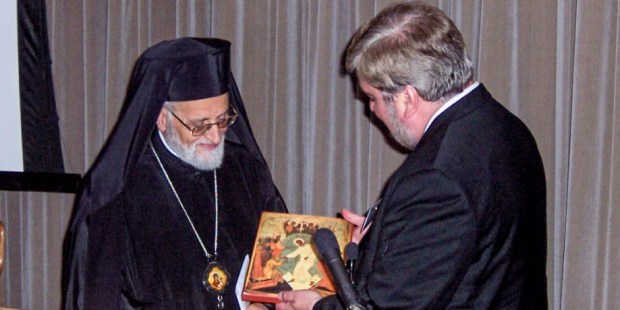 The Week of Prayer for Christian Unity culminates with Thursday’s Feast of the Conversion of St. Paul. The Week of Prayer, which has been observed across denominational lines for over 100 years, is a chance for Christians to unite their prayers with Jesus’ prayer at the Last Supper, “that all may be one.”

For more than 20 years, restoration of communion among separated Christians has been the focus of the Orientale Lumen Foundation. Founded by a Byzantine Catholic from Virginia, Jack Figel, the foundation strives to bring together Catholic and Orthodox on the grassroots level, to get to know one another as people and become familiar with one another’s traditions, to pray together and go on pilgrimages, and to hear theologians discuss issues in ecumenism.

The foundation sponsors conferences each year for several days in June, often in Washington, D.C., but sometimes elsewhere, such as Istanbul.

Aleteia asked Figel about how the effort has played out.

While the Week of Prayer for Christian Unity concerns all ecumenical efforts, the Orientale Lumen Foundation focuses on Catholics and Orthodox. Why?

When I started this, the document Orientale Lumen (“Light of the East”) was not getting a lot of attention. So I took the name of Pope John Paul’s apostolic letter of 1995 as the name of a conference to bring attention to its contents, and from that have sprung annual events.

Tell me about some ways these gatherings have built up greater unity in the Church.

The three biggest accomplishments are first, that we’ve brought together speakers who never would have had to opportunity to meet otherwise. Two, it’s one of the only gatherings where lay persons and parish priests have the opportunity to interact with Church leaders and ecumenists from around the world. And it has no agenda, other than bringing people together and thus to love each other, which hopefully will lead to unity. That’s a quote that Metropolitan Kallistos Ware [an Orthodox theologian] uses many times, from Cardinal [Leo Jozef] Suenens, from Belgium.

More particularly, the opening prayer service we’ve had from the very beginning is the “Moleben to the Holy Spirit,” in which we invoke the Holy Spirit to come upon our gathering. One year, Ukrainian Orthodox Archbishop Vsevelod [Skopelos] invited all the hierarchs who were present to join him in that prayer service, and we had eight bishops praying together, including Roman Catholic, Ukrainian Catholic, Assyrian Church of the East, and a bishop of the Ecumenical Patriarchate.

Those kinds of special events wouldn’t have occurred otherwise. Some of those relationships, as Metropolitan Kallistos often says, have developed into very deep ecumenical friendships. He reminds me often that he’s met people at Orientale Lumen conferences that he never would have met … I personally believe that some of the great strides that have been made over the past six to seven years, such as the [documents of the Catholic-Orthodox dialogue] Ravenna Document and Chieti statement, have Metropolitan Kallistos’ fingerprints all over them. And it’s because of his participating in the Orientale Lumen conferences since the very first one.

In addition to the theological and ecclesiastical issues that have to be worked out, geopolitics often adds to tensions between various groups, such as between Russian Orthodox and Ukrainian Greek Catholics. Can you tell me about how Orientale Lumen has had to find ways to deal with some of these difficulties, and what the outcome has been.

Let me give you an example. Besides the 21 conferences we’ve held in the U.S., we had three in Constantinople. At one of those, I invited Cardinal Lubomyr Husar of the Ukrainian Greek Catholic Church and Bishop Milan Šašik, the head of the Ruthenian Greek Catholic Church in Ukraine. Ecumenical Patriarch Bartholomew welcomed all of us and then had a private meeting with those two bishops along with Metropolitan Kallistos. It was the first time in history since the Union of Brest or the Union of Uzhhurod that the heads of those Churches ever met an ecumenical patriarch of Constantinople. Until then there was never any invitation. The Union of Brest and Union of Uzhhurod brought the Byzantine-rite Slav churches into the Catholic Church. Bartholomew did not object meeting with them, knowing full well who they were, and it went very well. Those Churches trace their roots to Sts. Cyril and Methodius and to St. Vladimir, and their Christianity traces back to Constantinople. So it was like the bishops of these two Churches were now coming back to their home Church. I believe Cardinal Husar went back for a more formal meeting, and his successor, Major Archbishop Sviatoslav, has visited a couple of times. In some ways, I think Orientale Lumen broke the ice for that particular discussion to start.

I try to avoid the [geopolitical issues] and just try to bring people together and have no agenda.

You are a Catholic who has spent so much time among Orthodox. How has your self-understanding as a member of the Church developed?

I like to point to something Patriarch Gregorios of the Melkite Greek Catholic Church said. He came as a speaker to our sixth conference, at the Basilica of the National Shrine of the Immaculate Conception. The title of his talk was “I am Orthodox with a Plus”—plus being “in communion with the bishop of Rome.”

Yes, I was born and raised Eastern Catholic. In college, I didn’t know what that meant. I was in an engineering school with very little church around in general. My early career in business had me traveling the world, so I was not a heavy church-goer. Since I started this, I certainly have become much more immersed in it.

I guess my own self-awareness has evolved into what Patriarch Gregorios described: I am Orthodox, I am Eastern Christian, plus I am part of the Church that is in communion with the Bishop of Rome. I’ve dealt with a few Roman Catholic university professors over the years in these events that I had to educate that I am not Roman Catholic. They like to refer to the “Eastern rites of the Roman Catholic Church.” We are, I believe, an Eastern Church in and of itself, and come from Churches that have counterparts in the Orthodox world. And there are a few Eastern Catholic bishops who have participated who have said that they would gladly give up their see if their Church would merge back with their Orthodox counterparts and become one Church, but all in communion with the bishop of Rome.

[Full communion] is my own personal goal to see, hopefully in my lifetime. We did have a conference one year titled “Church Unity Before 2054?” It occurred to me that it was the year 2004, when I turned 50, and I realized that if I lived so long that we cold see unity in 2054, I would be 100 years old. It struck me as not just coincidental.

So my question to speakers was “What will it take to avoid 1,000 years of separation?”