The best jokes about Jesuits, by Jesuits 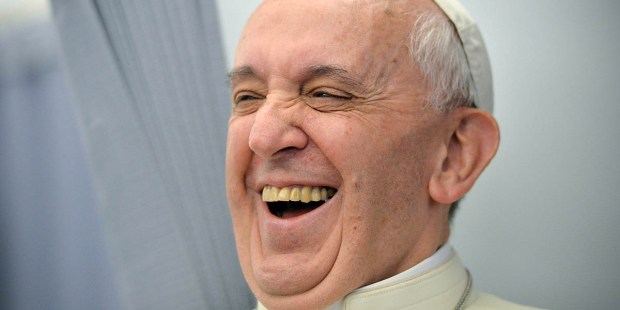 Who says religious don’t have a sense of humor? The Jesuits, at least, have proven theirs …

“Let us not lose that joyful, humorous and even self-deprecating spirit which makes people amiable even in difficult situations. How beneficial is a good dose of humor!” Do you know who said that? A Jesuit! Pope Francis, speaking to members of the Roman Curia, in 2014. He mentioned a prayer of St. Thomas More that asks the Lord, “Grant me, O Lord, a sense of good humor. Allow me the grace to be able to take a joke and to discover in life a bit of joy, and to be able to share it with others.”

And then there is this other Jesuit, the Flemish Nikolaas Sintobin, author of “Make fun of the Jesuits: Humor and Spirituality” (“Moquez vous des jésuites… Humour et spiritualité”), who opens each chapter of his book with a joke to show the strategic role that humor can have in our faith journey. Here are some jokes about the Jesuits told by themselves, selected by our confreres of Aleteia in Italy:

A somewhat vain Jesuit suffering from heart problems needs an operation. On the operating table, he asks God, “Lord, do you think I’ll make it through, or is my end near?” God tells him, “No … You’ll still live at least another 40 years!” Once cured, the Jesuit decides to get a little hair implant done, plus a face lift, cosmetic dental work, and a cosmetic chin implant, etc. In short, he comes out transformed: another man. But as he leaves the hospital, a car runs him over and he dies … When he appears before God, he asks Him, “Lord, you told me that I’d live another 40 years!” And God says, “Oops, sorry! I didn’t recognize you …”

A Jesuit missionary writes a letter to his superior to tell him about his ministry on a tropical island. “Dear Father, winter here is so beautiful that Paradise does not interest the inhabitants. In summer, on the contrary, it’s so hot that they’re really not afraid of hell!”

A Jesuit and a rabbi at an official dinner

A Jesuit and a rabbi sit next to each other at an official dinner. As they chat together, a superb pork roast arrives on the table. The Jesuit says to the rabbi, “Try it, it’s really delicious!” The rabbi says, “I can’t eat pork, my religion forbids it.” Then Jesuit says to the rabbi: “You don’t know what you’re missing …” Dinner continues and eventually the guests get up. As he’s saying goodbye to the Jesuit, the rabbi says, “See you later, and tell your wife I said hello!” The Jesuit answers, “But, I’m not married—my religion doesn’t allow it.” So the rabbi says, “You don’t know what you’re missing …”

This article was originally published in the French edition of Aleteia.