© University of Canterbury | With permission

Scholars have digitized the 15th-century manuscript and are examining it in hopes of uncovering hidden secrets.

For the first time in modern history, the Canterbury Roll, a 16-foot long, 600-year-old scroll that chronicles the major players and events English history, is available for viewing by the public, according to a report in News.com.au.

The ancient and unique manuscript, which traces English lineage from Noah to the English kings and queens of the late Middle Ages, dates back to the time of the War of the Roses, a series of English civil wars that inspired the show Game of Thrones.

Scholars at the University of Canterbury in New Zealand, where the scroll has been held for the last 100 years, hope to have the entire manuscript digitized by the end of this year. A “stage one” version is now available online.

“The Canterbury Roll is the most significant and substantial medieval artifact in New Zealand. For 100 years, UC has been the guardian of this unique 600-year-old treasure, which tells the history of England from its mythical origins to the late Middle Ages,” said University of Canterbury Senior Lecturer Chris Jones.

“No one has anything like this in New Zealand or Australia. And it’s utterly bonkers that no one really knows we have it, because it’s magnificent!”

The Wars of the Roses took place over three centuries, pitting two British families, the Lancasters and the Yorks, against one another.

“It features contributions from both the key players in the Wars of the Roses — it was originally drawn up by the Lancastrian side in the conflict but it fell into Yorkist hands and they rewrote part of it,” said Jones.

This month a team of British scholars is working with the University of Canterbury to conduct in-depth testing of the manuscript in the hopes of uncovering hidden writing locked within in, according to the News.com.au report. 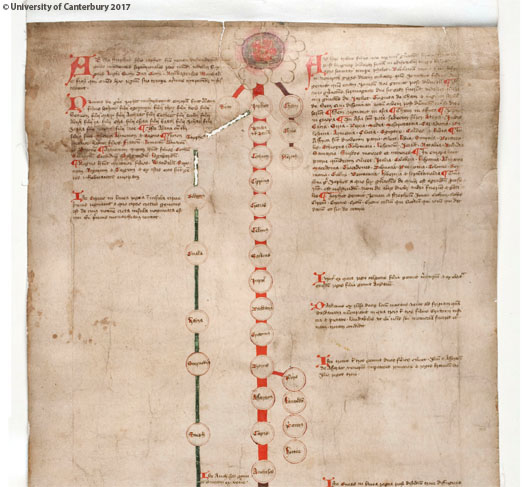