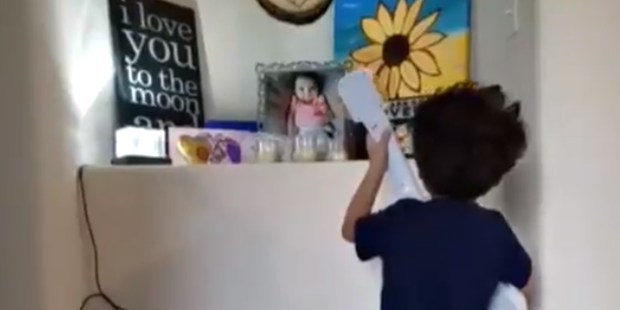 He sang to his sister on what would have been her first birthday.

On what would have been her first birthday, 4-year-old Alexander Vazquez  took his toy guitar over to a picture of his late baby sister and serenaded her with “Remember Me” from the animated film Coco. Little Ava Lynn Vazquez passed away at just 4 months old from a kidney condition, and his parents used the film to help Alexander grieve for his baby sister.

The film centers around the Mexican tradition of Dia de Los Muertos, or Day of the Dead, and tells the adventures of a young boy who travels to the land of the dead. From the film Alexander was able to understand that death does not mean that our loved ones are no longer with us.

Though not an explicitly religious story, the film still introduces details that ring true for Catholics, including the immortality of the soul and the power of our prayers to help our deceased loved ones. Alexander’s parents, Stephanie and Samir, even made a Dia de Los Muertos altar in remembrance for their baby girl.

For more information about praying for the dead, click here.

Read more:
Day of the Dead: Faith and Folklore Honoring the Life of Those Who Have Gone before Us