Joint Korean team at Olympics gives hope for a world where conflicts are resolved with respect, says Francis 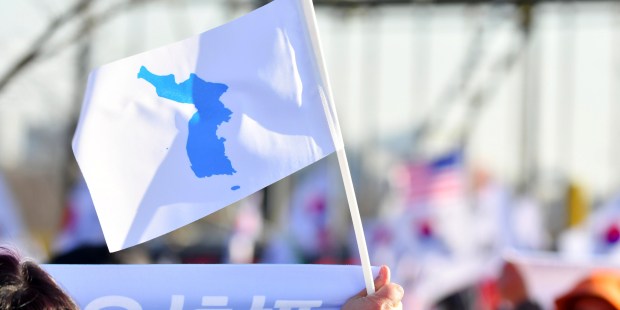 KIM DOO-HO I AFP
(FILES) This file photo taken on February 4, 2018 shows a South Korean supporter of the unified Korea female ice hockey team waving a "Unification flag" toward people protesting against the team, outside an ice rink before a friendly ice hockey match between the combined team and Sweden, in the western city of Incheon on February 4, 2018 ahead of the Pyeongchang 2018 Winter Olympic Games.
Japan said on February 5, 2018 it had lodged a protest with South Korea over the "unacceptable" use of a unified Korean Olympic flag that features a set of disputed islands. / AFP PHOTO / KIM DOO-HO
Share
Print
Kathleen N. Hattrup | Feb 07, 2018

Pope: May these Olympics be a great feast of friendship and sport! God bless you and keep you!

Pope Francis says that the two Koreas competing as a single team in the Olympics gives hope “for a world in which conflicts are resolved peacefully with dialogue and mutual respect, as sport also teaches us to do.”

The pope said this at the end of today’s general audience, as he noted that on Friday, the 23rd Winter Olympic Games will open in the city of PyeongChang in South Korea, with 92 countries participating.

He said that the Koreas marching together under a single flag and competing as a single team gives “special importance” to the “traditional Olympic truce.”

“I greet the International Olympic Committee, the athletes who will participate in the Games in PyeongChang, the authorities and the people of the Korean Peninsula. I accompany you all in prayer, as I reiterate the commitment of the Holy See to support any useful initiative in favour of peace and the encounter between peoples. May these Olympics be a great feast of friendship and sport! God bless you and keep you,” he said.

Read more:
North and South Korea will march under the same flag this Winter Olympics

North Korea announced that the sister of Kim Jong-un will attend Friday’s Olympic opening ceremony. Kim Yo-jong, a senior Workers’ Party official promoted to the politburo last year, will be the first member of the immediate Kim family to cross the border between North and South Korea.

The move is widely being seen as an effort to ease tensions between the two neighbours who never signed a peace treaty at the end of the Korean War in 1953. The border, or demilitarized zone between the two countries, remains one of the most heavily fortified borders in the world today.

Read more:
The Christian Roots of the Olympics

As a sign of friendship, Monsignor Sanchez de Toca will present the President of the IOC, Thomas Bach, and Korean athletes with t-shirts of “Vatican Athletics,” the team composed of employees of the Holy See that the Secretariat of State has placed under the auspices of the Pontifical Council for Culture. The aim of the team is to inspire solidarity and friendship in sport.

In 2016 the Vatican was represented at the Olympic summer games in Rio de Janeiro.

Despite the fact that the Vatican does not have a team directly participating at the games, the friendship and collaboration continues between the IOC and the Holy See, with several projects, such as the Olympic Youth Games scheduled for October 2018 in Buenos Aires.

Read more:
Refugees Will Compete in Olympics as Unique Team