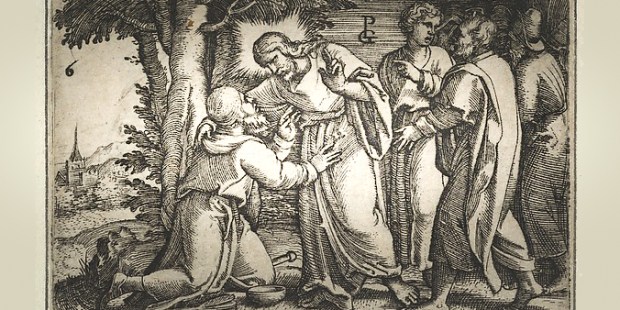 Georg Pencz via The Metropolitan Museum of Art is licensed under CC0 1.0
Share
Print
Tom Hoopes - published on 02/09/18

Don’t tune out the readings just because they are about lepers. You’re a leper, too.

If you replace “sin” with “leprosy” in the readings this Sunday (Sixth Sunday of Ordinary Time, Year B) you will hear them as they were intended: a collection of great advice for each of us.

1: Leprosy is infectious; so is sin.

Lepers were ostracized from society because people feared the disease would spread.

Sin is the same way. “Sin creates a proclivity to sin,” says the Catechism; “Sin tends to reproduce itself and reinforce itself.” It clouds our own judgement and so we sin again. And since we are social animals, our sinning, seen by others, lowers their own resistance to sin.

Christina the Astonishing was a Belgian holy woman who “could not stand the odor of other people because she could smell the sin in them.”

She fled from them, which is not normally the right way to respond to sinful humanity — but does drive home the fact that the state of sin isn’t a neutral condition.

Sin mars our souls the way leprosy mars our bodies. It replaces the beauty of innocence with the sour whiff of pride and the grim cloud of self-loathing.

3: Leprosy isolates you; so does sin.

Lepers had to literally stay outside of the city; sin isolates us where we are.

Think of the evil leper king in Braveheart. He was always there, up in his dark attic. His son has to sneak up to hear his bad counsel. That’s us and sin.

Sin lives in the shadows. We visit it in hiding. But there it sits in the dark, calling us to reject heroism and resign ourselves to failure. It reassures us that it is okay to give up on purity, on high ideals, on sacrifice. It tells us love always fails and to look out for ourselves.

4: Lepers know not to infect others.

Or think of those other movie lepers: The mother and sister in Ben Hur. They have not seen their beloved son and brother in years — but hide away from him for his own good because they don’t want to infect or upset him.

“Avoid giving offense whether to the Jews or Greeks or the church of God,” he says. Try “to please everyone in every way, not seeking [your] own benefit but that of the many.

Don’t expose your loved ones to the leprosy of sin.

Today in the Gospel, Jesus sends the leper to the priest. In the Old Testament reading, we see why — priests were in charge of giving cured lepers a clean bill of health.

Today, priests do the same thing in the confessional — telling us what penance we must do to kill our sin and rejoin the body of Christ.

As today’s Psalm puts it: “I confessed my faults to the Lord and you took away the guilt of my sin.”

6: Lepers know how much it cost Christ to approach them.

For someone to approach and interact with a leper was unusual. To approach a leper is to risk contamination and a ruined life. Yet Jesus Christ reached out to lepers anyway.

He did the same for us. The Second Person of the Trinity was also holy, happy and complete in heaven. But he chose to take on the animal existence of humanity for us. Today, he goes even further — he comes to our altar in the Eucharistic form of bread and unites with us again.

When we approach Jesus we should feel as grateful as the lepers. Christ defiles himself — for us.

7: Lepers and sinners both know the joy of healing.

“A habitual sinner came to Jesus and kneeling down begged him and said, ‘If you wish, you can make me holy.’
“Jesus said to him, ‘I do will it. Be made clean.’
“The man went away and began to publicize the whole matter. So many people were inspired by his story of freedom and heroism that they gathered at churches everywhere to get to know Jesus.”

That should be how we react to forgiveness. A “clean bill of health” only reunited a former leper with family and friends. Absolution reunites us with family, friends — and God.

There is no greater feeling. “You fill me with joy of salvation,” says the Psalm. “Blessed the man to whom the Lord imputes no guilt.”