“Fake news,” post-truth, and technology … in the 19th century 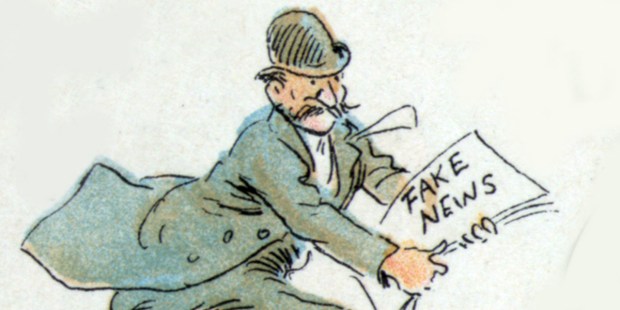 Accusations of falsehood against technologically managed information might seem recent, but their origin goes back more than a century.

The origin of so-called “fake news” probably dates back to the birth of journalism. Lies are as old as humanity itself. It is reasonable to think that, from the moment when there began to be interests beyond truth-telling tied to information about current events, there were cases of manipulation of the news with shady motives. Nonetheless, the concept of “fake news” has become massively more popular recently, along with another term that is being used a great deal nowadays: the adjective “post-truth.”

These words are like hand grenades thrown by political rivals, economic adversaries, and cultural enemies with the goal of damaging the credibility of their opponents’ claims. In this context, technology plays a central role. Digital platforms and tools (the internet, social networks, mobile devices, etc.) help produce and propagate chicanery on a large scale as at no other time in history. Nonetheless, analysts warn against the danger of falling into the opposite extreme, that is, ignoring all content that arrives through these channels.

In a short period of time, many people have, in fact, passed from one extreme to another, such that now they don’t want to pay attention to any material that was created digitally or which has traveled through cyberspace. Technological advances that, in general terms, are the most advantageous—such as robotics, machine learning, artificial intelligence, or big data—are perceived as threatening and thus contribute to complicate this situation even more (if possible). The debate seems new, but it actually isn’t all that recent. It could be said that accusations of this kind favored by technoskeptics do have a known date of origin: January 8, 1889.

On that day, American inventor Herman Hollerith patented an electromechanical punched card tabulator that launched an industry based on the alliance between statistics and computer engineering. Three years earlier, he had begun a business that consisted of renting out similar devices for the U.S. national census. This system—the same one used by train conductors when they punched passengers’ tickets according to the destination and other options, to avoid fraud—became the secret of the success of IBM, which was founded in 1911.

While the American census of 1880 was in process, the director of the vital statistics division, John Shaw Billings, observed with concern that the workers were counting manually. Then, he made the following observation to an assistant: “‘There ought to be some mechanical way of doing this job, on the principle of the Jacquard loom, whereby holes in a card can regulate the pattern to be woven.” The assistant was none other that Hollerith. Ten years later, the census was carried out using this technique. Hollerith’s method made it possible to save 5 million dollars and eight years of work.