How to bury the Alleluia before Lent 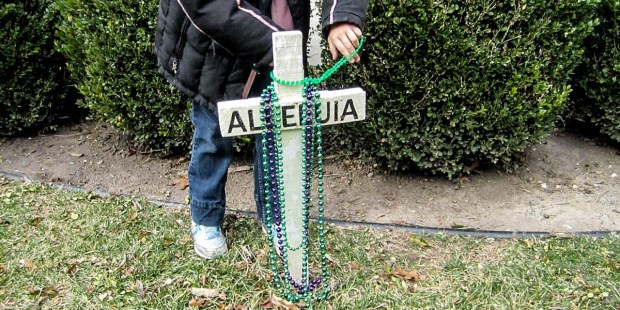 A solemn way to say goodbye to a very joyous word until it is said again at Easter.

During the entire 40 days of Lent the word “Alleluia” is completely absent from the liturgy of the Church. It is never said once, even on Sundays. However, it is an important word, one that deserves an appropriate send off before resuming its use at the Easter Vigil.

First of all, the word “Alleluia” is rooted in a Hebrew expression that means “praise the Lord.” It is frequently found in the Psalms and has been always associated with joy and exultation. This is why it is forbidden during Lent, a somber liturgical season focused on the sacrifice of Jesus Christ on the cross. To put it simply, Lent is like one long Good Friday.

With this in mind the Alleluia never fit in the Lenten season, but Christians over the centuries didn’t think it was right to simply stop saying it. Instead they “buried” it in a solemn ceremony. It was a way to put the Alleluia into the “tomb,” only to discover it again at Easter when the stone is removed and the Alleluia is “resurrected.”

Various traditions arose in the middle ages to “bury” the Alleluia before the beginning of Lent. It is said that many were inspired by the words of Bishop William Duranti in the 13th century when he wrote, “We part from the Alleluia as from a beloved friend, whom we embrace many times and kiss on the mouth, head and hand, before we leave him.”

In France this became a physical act when a banner or board was created that said “Alleluia” in beautiful letters. A ceremony would be conducted after the liturgy where a hole was dug in the parish garden to bury the Alleluia, only to be uncovered again at Easter. A description of the procedure is found in a 15th century book of Toul, France.

On Saturday before Septuagesima Sunday all choir boys gather in the sacristy during the prayer of the None, to prepare for the burial of the Alleluia. After the last Benedicamus Domino [i.e., at the end of the Vespers service] they march in procession, with crosses, tapers, holy water and censers; and they carry a coffin, as in a funeral. Thus they proceed through the aisle, moaning and mourning, until they reach the cloister. There they bury the coffin; they sprinkle it with holy water and incense it; whereupon they return to the sacristy by the same way.

This tradition is still found in some places, most notably in the catechetical formation of the Catechesis of the Good Shepherd, where children participate in a smaller scale ceremony before Lent.

It is a beautiful tradition, one that is especially joyous when the Alleluia is brought back to life at Easter.

Read more:
What does “Alleluia” mean?