Those who pay for sex are hypocrites, says pope 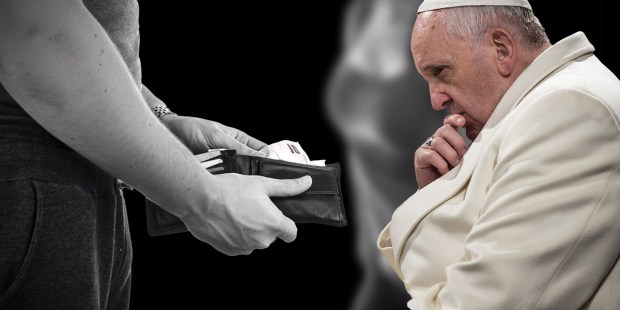 “If there are so many women who are victims of trafficking, who end up on the streets of our cities, it is because many men — young, middle-aged, elderly — demand these services and are willing to pay,” Francis said.

Pope Francis denounced again today the sale of human beings as slaves, recognizing that there are those who “do not want to talk about (the problem) because they are the recipients at the end of the ‘chain of consumption,’ as users of the ‘service’ offered on the streets or the internet.”

“If there are so many women who are victims of trafficking, who end up on the streets of our cities, it is because many men — young, middle-aged, elderly — demand these services and are willing to pay,” Francis said, speaking at the Vatican.

The pontiff bluntly condemned the “hypocrisy of the clients who pay for sex,” with no care for the victims of trafficking, using them for their own pleasure. His comments came in a response to questions posed by young people participating in a conference dedicated to a World Day of Reflection against Human Trafficking in Rome.

“I wonder, then: Are dealers really the main cause of trafficking? I believe that the main cause is the unscrupulous selfishness of so many hypocritical people in our world,” he said.

The pope also emphasized the need for “real awareness” regarding “demand for traffic” behind the “supply:” “We are all called to leave hypocrisy aside, realize we are ​​ part of the problem instead of turning a blind eye, proclaiming our innocence.”

On the other hand, the leader of the Catholic Church also pointed out that the problem of human trafficking is exacerbated when “countries are victims of extreme poverty, violence and corruption.” In such cases, “the economy, the legal framework and basic infrastructures are inefficient and do not guarantee security and essential rights.”

“In these contexts, the perpetrators of these crimes act with impunity. Organized crime and the illegal trafficking of drugs and human beings choose victims from among people who today have little means of subsistence and even less hope for tomorrow,”  he lamented.

The pope remarked how “throw-away culture” is at the root of “behaviors that, in the market and in the globalized world, lead to the exploitation of the human being, at all levels. The needs, dramas and poverty of many people end up being normalized.”

He also pointed out that some nations promote, “within the international community, a particularly harsh policy of wanting to defeat human trafficking; but this attitude is itself deceptive, because of the economic interests behind it; we do not want to address the real causes of the problem.”

Furthermore, “at an international level, some stances are not always consistent with internal policies. I really hope you can send a message to leaders at all levels of government, business and society, asking for access to good education and, therefore, fair and sustainable employment.”

He urged work for a “strategy that includes a greater knowledge of the topic of human trafficking, based on clear terminology and concrete testimonies of the protagonists; there is no doubt they can help.”