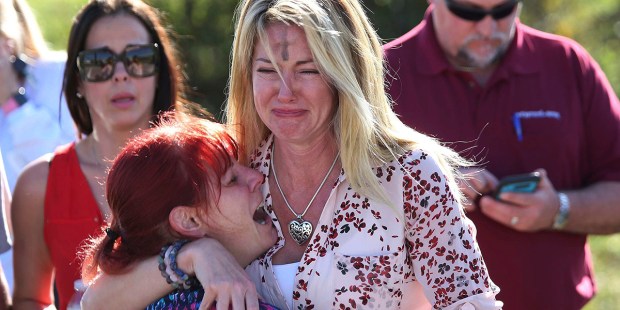 Until now, the news was that people were getting used to frequent school-related uses of firearms

Until Valentine’s Day, the nation seemed to be getting so accustomed to the use of firearms on or near campus that it usually didn’t lead to much news coverage.

Then, on a day that should have been a celebration of love, carnage rained down on Marjory Stoneman Douglas High School in Parkland, Fla. A former student who had been expelled for disciplinary reasons allegedly opened fire at the South Florida high school Wednesday, killing 17 people and wounding at least a dozen others.

The incident raised the 2018 death toll in school-related shootings to 23. It was the eighth-deadliest mass shooting in modern U.S. history, with seven of the 10 deadliest happening since 2007, according to the Los Angeles Times.

Here is a roundup of other incidents involving firearms on or near campuses so far this year. This list is based on media reports and on reporting by a group called Everytown for Gun Safety. It should be noted, however, that the widely reported number of 18 “school shootings” so far in 2018 includes incidents that happened near schools but did not apparently target students:

Jan. 3: A 31-year-old man shot and killed himself in the parking lot of East Olive Elementary School in St. Johns, Mich.

Jan. 4: A person fired a bullet that entered an office window at New Start High School in Seattle. No one was injured.

Jan. 6: A person shot out the window of a school bus in the Forest City School District in Iowa. No one was hurt by the bullet or by the shattering glass.

Jan. 9: A 14-year-old boy killed himself in a bathroom of the Coronado Elementary School in Sierra Vista, Ariz., with a family member’s gun.

Jan. 10: Shots were fired at California State University San Bernardino. A bullet went through a window of the Visual Arts building, and students and staff sheltered in place while law enforcement investigated. No one was injured.

Jan. 10: A student at the Grayson College Criminal Justice Center in Denison, Texas, accidentally fired a gun, sending a bullet through a classroom wall, which came out through the other side and went out a window. No one was injured.

Jan. 15: Three students were in a dorm room at Wiley College in Marshall, Texas, when a bullet was fired into the room. Police say that two people in a dark sedan pulled up to the parking lot of the dorm room and exchanged fire with someone in the lot. No one was injured.

Jan. 20: Najee Ali Baker, a 21-year-old Winston-Salem State University student, was killed while attending an event at Wake Forest University in Winston-Salem, N.C. Law enforcement said Baker was shot after an altercation at an Greek Life event around 1am.

Jan. 22: A 14-year-old student was taken to the hospital after shots rang out at the Net Charter School in Gentilly, La. It’s not clear from reports whether the injury was a gunshot wound or another wound that happened in the chaos of the shooting, according to Think Progress. The police chief said there was a dark-colored pickup truck with possibly tinted windows in the area of the school, and that someone in the truck fired the shots.

Jan. 22: A 15-year-old girl was shot and wounded after a 16-year-old male student opened fire with a semi-automatic handgun in the cafeteria of Italy High School in Italy, Texas. Both the suspect and the victim were students at the high school, according to police.

Jan. 23: Two students were killed at Marshall County High School in Benton, Ky., when a 15-year-old opened fire, injuring more than a dozen other students.

Jan. 25: A 16-year-old student at Murphy High School in Mobile, Ala., allegedly pointed a gun at school administrators and other students in the school before going outside and firing all the rounds in the air. No one was injured.

Jan. 26: Someone fired shots from a car in the Dearborn High School parking lot during a basketball game, but nobody was injured.

Jan. 31: A man died following reports of a large fight and a shooting outside Lincoln High School in Philadelphia.

Feb. 5: A 17-year-old student was shot twice in the chest after an argument at Oxon Hill High School in Oxon Hill, Md.

Feb. 8: A gunshot was fired in the Metropolitan High School in the Bronx. No one was injured. Police took a 17-year-old into custody.

Since the 2012 school shooting in Newtown, Conn., there have been at least 239 school shootings nationwide, according to the New York Times. In those incidents, 438 people were shot, 138 of whom were killed. Sixteen of the shootings can be classified as mass shootings, events in which four or more people are shot.