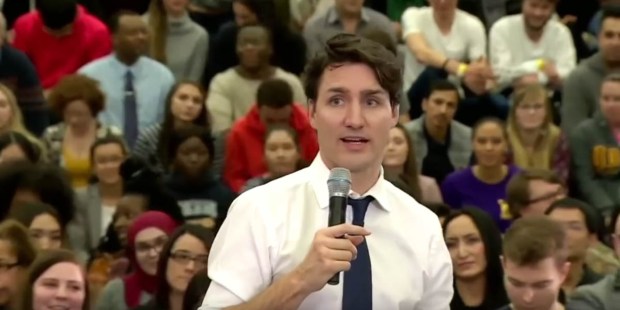 Canadian Prime Minister Justin Trudeau was roundly mocked after he corrected a young woman for using the term “mankind” during a public forum February 1.

“We like to say ‘peoplekind,’ not necessarily ‘mankind,'” Trudeau interrupted during an Edmonton town hall meeting, “because it’s more inclusive.”

He later apologized, saying he was trying to make a “dumb joke” during a constituent’s long-winded question.

But the question the young woman asked got lost in the media storm that ensued over the progressive prime minister’s political correctness.

“Unfortunately, in Canada, our volunteering as a charitable religious organization is extremely difficult,” said the young woman, after identifying herself as a member of the Korea-based World Missionary Society Church of God, a group that teaches the “motherhood” of God. “That’s why, in actuality, we cannot do free volunteering to help our neighbors in need as we truly desire. So, that’s why we came here today to ask you, to also look into the policies that religious charitable organizations have in our legislation so that it can also be changed, because maternal love is the love that’s going to change the future of mankind.”

Efforts to reach the woman for clarification were unsuccessful. But a number of experts spoke with Aleteia about some of the challenges facing religious individuals and groups and people of conscious in Canada now.

“The most significant religious liberty issues going on in Canada right now have to do with a deep confusion over what is public and what is private, and an overreach on the part of people who happen to be right now in political power, and the idea that if you have won political power you have the authority to impose your policy preferences, even on private institutions,” said Adèle Keim, of Becket, a law firm defending the free exercise of all faiths.

For example, the government of the Province of Quebec tried to force Loyola High School, a 100-year old Catholic school in Montreal, to teach its world religions and moral reasoning course in place of the Catholic perspective on moral issues and world religions. It ordered Loyola to teach from a position of strict neutrality.

“You may not encourage students to adopt the Catholic view on sex or euthanasia or what have you,” Keim characterized the government as saying. “And you must be neutral in how you present other world religions and your own faith. You can’t say the Catholic position on God or Mary or the divinity of Christ is the right one. You have to present it as one among many perspectives.”

The case was brought to the Supreme Court, where the government argued that Loyola has no religious freedom rights because it’s a group and religious freedom applies only to individuals. The school won, however.

“The idea that the state could tell a religious school what it must teach about religion, to me, is a fundamental misunderstanding of what is theprivate sphere and what requirements a state may impose,” said Keim, a native of Canada who worked for a Member of Parliament and spent two years covering international religious freedom and social issues for the Evangelical Fellowship of Canada before becoming a lawyer.

On the other side of Canada, in British Columbia, Trinity Western, an evangelical Christian university that has millions of dollars in government grants, wanted to open a law school. But the law society, which is similar to a bar association in the United States, said it would not recognize any graduates because the university’s code of conduct limits women’s reproductive rights and expects students to forswear sex outside of traditional marriage and respect life from conception.

“The arguments go to whether a private institution can receive a license from the state if it has religiously based values and traditions and rules that are different from what the state itself could impose if it were running an institution,” Keim said.

The case was argued in December. A Supreme Court ruling is pending.

Finally, there was a sudden change to a longstanding, large and popular government grant program designed to provide employment for young people, especially students. The program pays the summertime salaries of young people in school who want to work at a nonprofit.

“It kind of helps nonprofits turbocharge their work,” Keim said. “All kinds of religious nonprofits use it and rely on it heavily to get significant student work forces.”

But this past year, without any consultation, the Trudeau government told nonprofits they could not use the program unless they had values or policies that respect women’s “reproductive rights” or other Canadian values.

“Part of neutrality in religion is not trying to control the internal policies of private religious organizations,” Keim said.

Another area where there is a serious threat to religious liberty in Canada is in the area of euthanasia and physician-assisted suicide, said Margaret Somerville, an Australian-Canadian who was founding director of the McGill Centre for Medicine, Ethics, and Law in Montreal and now teaches bioethics at University of Notre Dame Australia.

“The most pressing issue by far is the movement to try to force doctors to be complicit in euthanasia and assisted suicide, where it’s contrary to their conscience or religious beliefs,” said Somerville. The Ontario Medical Association has put out directives that contain an obligation for objecting physicians to give an “effective referral.”

“That means if you’re not willing to do a legal procedure yourself you must send a person to somebody you know who will be willing to do it,” she said. “The problem with that is that it’s complicity in what you believe to be an unethical or immoral act.”

The progressive agenda in Canada has had a  chilling effect, Somerville said.

“I’ve had personal experiences with, especially young people in Canada, and that can include medical or law students or young academics or young recent PhD graduates looking for a university job, and they’re all frightened to say that they don’t agree with the so-called progressive values ideology,” she said. “More and more, Canada is seeking to impose this on people. The summer jobs program is a good example. ‘You’ve got to sign on to our values, or we won’t give you taxpayer money, which you have contributed to.’ That is really appalling. We’re supposed to be a free and democratic society, but more an more it’s becoming totalitarian.”