Billy Graham is dead at 99 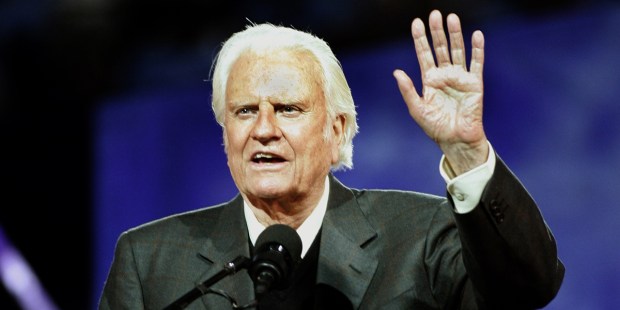 Evangelist was spiritual adviser to several US presidents

Evangelist Billy Graham has died at the age of 99.

An ordained Southern Baptist minister, Graham was the most well-known televangelist of the 20th century, and was a spiritual adviser to several American presidents, including Dwight D. Eisenhower, Lyndon B. Johnson, and Richard M. Nixon.

President Donald J. Trump tweeted, “The GREAT Billy Graham is dead. There was nobody like him! He will be missed by Christians and all religions. A very special man.”

Vice President Michael R. Pence issued a statement saying, “Billy Graham’s ministry for the gospel of Jesus Christ and his matchless voice changed the lives of millions. We mourn his passing but I know with absolute certainty that today he heard those words, ‘well done good and faithful servant.'”

“As anyone growing up in the 1950’s and 1960’s can tell you, it was hard not to notice and be impressed by the Reverend Billy Graham,” said New York’s Cardinal Timothy M. Dolan. “There was no question that the Dolans were a Catholic family, firm in our faith, but in our household there was always respect and admiration for Billy Graham and the work he was doing to bring people to God. Whether it was one of his famous Crusades, radio programs, television specials, or meeting and counseling the presidents, Billy Graham seemed to be everywhere, always with the same message: Jesus is your Savior, and wants you to be happy with Him forever.”

Cardinal Dolan, who is a historian by training, added that his admiration for Graham “only grew as I studied our nation’s religious past, and came to appreciate even more the tremendous role he played in the American evangelical movement.”

William Martin, senior fellow in religion and public policy at Rice University’s Baker Institute for Public Policy, and author of A Prophet with Honor: The Billy Graham Story, said in a statement Wednesday, “No more than one or two popes, perhaps one or two other people, came close to what he achieved.”

“He was the key leader and the major spokesman of the evangelical movement during the last half of the 20th century,” Martin stated. “He held evangelistic crusades in more than 80 countries; he preached in person to more than 80 million people and live through various media to hundreds of millions of others.”

Graham came to prominence at a time when both religious and racial barriers were developing cracks, but geopolitical boundaries were defined primarily by a struggle between the Christian West and an international atheistic communist project. While Graham downplayed his own denomination, appealing to a broad spectrum of Christians, and broke precedent by preaching to racially integrated crowds, his sharp anti-communist themes earned him the attention of a powerful media mogul, catapulting him to national prominence.

His long career also coincided with the development of new forms of mass media, beginning with radio and television in the 1940s. By the time his last televised sermon, recorded on his 95th birthday, was broadcast by several networks, his message was also being disseminated through the internet.