C.S. Lewis tells you how to observe Lent 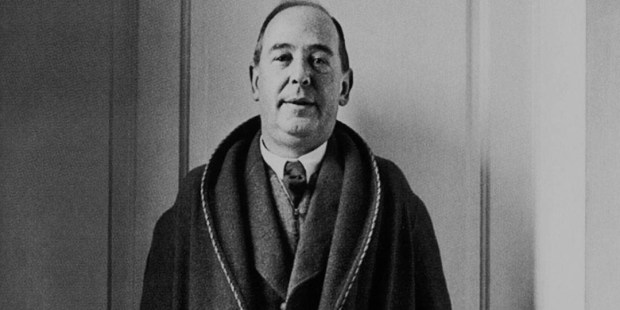 We are, Lewis says, “far too easily pleased.”

Most people, C.S. Lewis said back in 1941, think unselfishness the highest of the virtues. So do we. Ask people today to name an example of goodness and most will point to someone like St. Teresa of Calcutta. Goodness equals self-sacrifice.

That’s not untrue, but it is misguided. It even gets the saint wrong. Lewis notes that the great Christians of the past saw love as the highest virtue. He talks about this in a sermon called “The Weight of Glory” in the book of the same name. In it he says two things that may help us in understanding and pushing through, and maybe even enjoying, the disciplines of Lent. And not only those, but all the apparently burdensome requirements of the Catholic life.

First, we begin with obedience and God rewards us with some vision of the good we’re working towards. We do what someone who knows better than we do says to do and we find out they were right.

Lewis compares us to a schoolboy beginning to learn Greek. (That was a thing when Lewis was writing.) The boy has to slog through the grammar and vocabulary. It’s just work. He does it because he has to or because he wants a good grade or maybe to please his parents or his teacher. It will bring him the pleasure of reading Greek literature in the original language, but he has no feeling for that now. But gradually he gets some of the pleasure even as he slogs through it. Eventually he learns enough to want to learn more.

We’re like that schoolboy, Lewis says. We can’t know the joy of the vision of God very well. Indeed, we “cannot even begin to know it at all except by continuing to obey.” But God rewards us for that. We get “the first reward of our obedience in our increasing power to desire the ultimate reward.” We get glimpses of holiness the way the schoolboy gets glimpses of mastery.

The Church says observe Lent, follow these rules, do this, do that, and we do it, like the schoolboy slogging through Greek grammar to please his parents or his teacher. Like him, we suddenly see the point, but only after the effort. We see enough to keep going.

Second, Lewis points out that we already want what God offers us. Not well or perfectly, but we have hints or leads or clues. That schoolboy, if he’s imaginative, will already love some poems and stories in English. He just doesn’t yet know he’ll get the same joy from the ancient Greeks, once he learns their language. “If we are made for heaven,” says Lewis, “the desire for our proper place will be already in us, but not yet attached to its true object.”

He goes on for several pages describing this. We sense through beauty that “our real goal is elsewhere.” We long for something we can’t get in this world. We wouldn’t feel it, he insists, if we didn’t have a real thing to long for. He describes this longing in much greater detail in his autobiography Surprised By Joy.

Christianity, Lewis says, “has lots to say about self-denial, but not about self-denial as an end in itself. We are told to deny ourselves and to take up our crosses in order that we may follow Christ.” We all know that. Lewis adds a twist: “Nearly every description of what we shall ultimately find if we do so contains an appeal to desire.” And that, surprisingly, is the desire for our own good.

We tend to feel that wanting the best for ourselves is selfish, ignoble, mercenary. God wants it for us, Lewis says. My own youthful impression reading the New Testament was that God was offering a really big bribe. Anti-Christians had reason to slag off Christianity as “pie in the sky when you die.”

Except that God is saying, “Come get the pie.” If it’s good, we should want it, because it’s good, and anything good will be good for us, and good for everyone whose lives we share. St. Teresa of Calcutta lived as she did not because she loved self-sacrifice, but because she loved God and the sacrifice followed.

As Lewis notes: “If we consider the unblushing promises of reward and the staggering nature of the rewards promised in the Gospels, it would seem that our Lord finds our desires, not too strong, but too weak. We are half-hearted creatures, fooling about with drink and sex and ambition when infinite joy is offered us.” He compares us to a child “who wants to go on making mud pies in a slum because he cannot imagine what is meant by the offer of a holiday at the sea.”

We are, Lewis says, “far too easily pleased.” The Church’s disciplines, Lent not least, help us see more clearly what God wants to give us. We want mud pies. God wants to bring us to the sea.

See the earlier pieces in this series:

C.S. Lewis tells you what to do with your life

C.S. Lewis tells you what to read