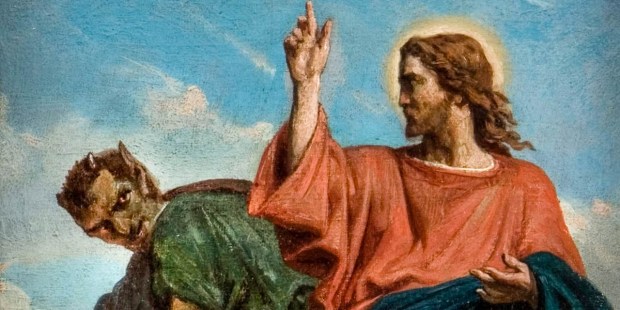 The spiritual life is a battle. Here’s how to fight.

The spiritual life is a battle. Not only is it a battle against our own selfish desires, but also against the evil spiritual forces of this world. St. John Paul II reminded the world about this reality when visiting Monte Gargano in 1987.

This battle against the devil … is still going on, because the devil is still alive and at work in world. In fact, the evil that is in it, the disorder we see in society, the infidelity of man, the interior fragmentation of which he is a victim, are not merely the consequences of original sin, but also the effect of the dark and infesting activity of Satan, of this saboteur of man’s moral equilibrium.

One of the chief ways that Satan tries to disrupt our lives is through temptations, luring us away from God and down a dark path that leads to destruction.

The good news is that God has equipped us with the weapons and armor able to fight against these darts of the enemy. However, we need to use them in order for us to be victorious with Christ in the battle against the Evil One.

Here are the top four ways to defeat the devil’s temptations as described by the Church and various exorcists.

The Catechism of the Catholic Church explains, “The Holy Spirit makes us discern between trials, which are necessary for the growth of the inner man, and temptation, which leads to sin and death. We must also discern between being tempted and consenting to temptation. Finally, discernment unmasks the lie of temptation, whose object appears to be good, a ‘delight to the eyes’ and desirable, when in reality its fruit is death. God does not want to impose the good, but wants free beings. … There is a certain usefulness to temptation. No one but God knows what our soul has received from him, not even we ourselves. But temptation reveals it in order to teach us to know ourselves, and in this way we discover our evil inclinations and are obliged to give thanks for the goods that temptation has revealed to us.”

In other words, we must first recognize the temptation and dig deeper, finding the root of it all. If we do not find the root that needs to be cured, we will not be able to fully renounce the temptation. In this way God allows temptation to reveal our weaknesses so that we understand what exactly we need to change.

Satan loves disorder and will do whatever he can to disrupt our prayer life. This is why it is vital to establish a routine of prayer where one does not only pray when they remember, but also at set times and durations. In this way we show to God our priorities and push Satan out of our lives. Exorcists always suggest to possessed persons to establish consistent spiritual habits to further prevent Satan’s future temptations.

Frequent the sacraments of Eucharist and Confession

Sins beget more sins and once we start down the slippery slope of sin it is hard to stop. The great gift of confession in the Catholic Church allows us to start over again and bring before the Lord our weaknesses and failings. He is the Divine Physician and can heal us with his Balm of Mercy.

After reconciling ourselves with God and the Church, exorcists further encourage souls to receive the Eucharist as much as possible. St. Thomas Aquinas confirmed that the Eucharist was a powerful weapon against Satan’s temptations in his Summa Theologiae when he wrote, “[The Eucharist] repels all the assaults of demons. Hence Chrysostom says: ‘Like lions breathing forth fire, thus do we depart from that table, being made terrible to the devil.’”

Invoke the name of Jesus

When we feel overwhelmed with temptation, we should cry out to God by invoking the name of Jesus. As St. Paul writes, “at the name of Jesus every knee should bow, in heaven and on earth and under the earth” (Philippians 2:10). There are countless stories of saints who, when tempted by Satan, simply invoked the name of Jesus over and over again until the temptation subsided. It is a simple but powerful way to remain faithful to Christ in the midst of a strong urge to go against his commandments.

Read more:
How to conquer temptation, according to ‘The Imitation of Christ’

Read more:
Advice from St. Gregory on how to reject 3 temptations of the devil