These 120 hackers have Pope Francis’ support 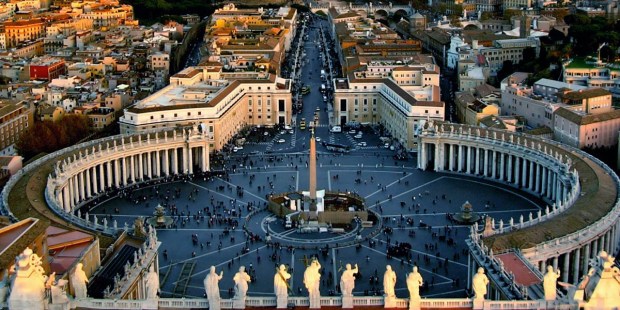 The Vatican “hackathon” is turning efforts to confront issues on social inclusion, interfaith dialogue and the refugee crisis, into a competition to find solutions.

As contradictory as “hackathon” and “Vatican” may seem, the Vatican is embracing hackers.

What’s going on? For the first time, the home base of the Roman Catholic Church is organizing a “hackathon”—a competition in which teams from around the world will be coming up with technological solutions to specific problems.

Known as VHacks, the competition will take place over 36 hours between March 8-11 and focus on problems of social inclusion, interfaith dialogue, and the migrant and refugee crisis.

Combining the words “hacking” and “marathon,” a hackathon brings together multi-disciplinary teams (including computer programmers, graphic designers, and project managers) to create solutions under a time constraint. It’s a competition, but a friendly one.

“VHacks is a call for responsibility—bringing people of all faiths together to address current global issues,” organizers say.

Still, many Catholics may be surprised by the Vatican’s openness to the activity, not least because of the negative connotations of the word “hacking.”

“In the public’s mind, hacking is something done by a group of people trying to break into computers, usually for nefarious purposes. They could be criminals or political operatives or people working for an adversarial company or country that wants to cause some mischief. Or they could be spies,” said Kevin McKee, faculty advisor for the Dos Pueblos High School hacking team in Santa Barbara, California.

“But that’s only one small facet of what hacking is,” he explained. “Another, much wider facet is that it’s a system where people are prompted and encouraged to create new and exciting solutions to problems. Frequently, young people do this in an organized fashion called hackathons.”

McKee’s own team, whom he describes as “self-taught, self-organized and self-motivated,” have won several competitions and have traveled as far as New York to compete.

VHacks is part of a larger mission spearheaded by Father Eric Salobir of the Catholic Order of Preachers—the Dominicans—to “foster dialogue between the tech world and the humanities,” he told TheNextWeb.

He is one of the founders of OPTIC, a think-tank dedicated to ethical issues and technology. OPTIC is co-organizing VHacks along with the Vatican’s Secretariat for Communication. The event also has the support of the Pontifical Council for Culture, and the Migrants & Refugees Section of the Dicastery for Integral Human Development, and is prepared by a group of student-volunteers from Harvard and MIT.

Organizers are inspired by a statement from Pope Francis: “How wonderful would it be if the growth of scientific and technological innovation would come along with more equality and social inclusion.”

In fact, participants come from all religious and cultural backgrounds, from 57 universities and five continents.

The 120 participants were chosen “based on academic accomplishments, innovative thinking, and alignment with our mission statement,” organizers said.

Their marching orders include creating solutions under these categories:

• Migrants and Refugees: Strengthen, support, and mobilize resources for migrants and refugees to assist them with relocation and integration.

Other goals of the confab are to “promote collaboration among youth leaders across diverse academic, ethnic, and religious backgrounds, and encourage value-based institutions to embrace technology to further their missions.”

Dos Pueblos High School’s McKee speculated that VHacks participants might look for solutions such as an iPad application that automatically calculates how much food is needed for a certain number of people in a refugee camp, for the migrants and refugees category, or a “theme-based message board system where people from different faiths can come on and have online dialogue via posting of small videos,” for the interfaith dialogue category.

“It takes a lot of creativity to come up with those ideas,” he said. “You have to have background knowledge … If you don’t know anything about refugees you’d be ill-prepared to be very successful. … If you have a bunch of computer geniuses come up with a solution for the interfaith dialogue problem and they don’t know anything about religion and faith and how important it is to people it’s probably going to be a bad solution, even though it might be real whiz bang.”

One student who will be attending, as part of a five-person team from Georgetown University in Washington, D.C., is Lucy Obus.

“I’m so excited that the Vatican, a presumably ‘old’ institution, is recognizing the value and necessity of emerging technologies in solving global challenges,” said Obus, who has training in scenic design and construction and also a background in visual design, sewing, and pottery. “I look forward to … meeting peers from around the globe who embrace technology to further human development.”

Sponsorship of the event comes from tech companies such as Google, Microsoft, and Salesforce, and non-profit institutions, such as the Foundation for Evangelization through the Media, which supports Aleteia. Aleteia is also a media partner of the event.

Also, the event includes an online expo on the implications of technological advancement on human development. Speakers will hail from leading tech firms and Vatican institutions. Selected hackathon participants, corporate partners, and institutions will showcase their innovations there, in order to inspire young people around the world to collaborate across divisions and use technology to address social issues as well.