Pope Francis calls on Church to adopt a “Marian style” 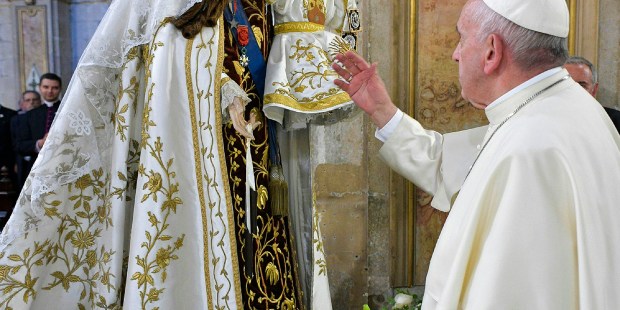 The Church is invited to take on a “Marian style,” Pope Francis says, and a “Marian style” consists of loving as the mother of Christ does, with “tenderness” and “affection.”

The Holy Father said this in a letter to Maria Teresa Compte Grau, the author of “10 Things Pope Francis Proposes to Women” (Diez cosas que el Papa Francisco propone a las mujeres, in Spanish), which will be presented on March 7, in Madrid, Spain, according to L’Osservatore Romano.

Following in the footsteps of his predecessors, the current head of the Catholic Church affirms the need for new “anthropological research” in order to understand both the feminine and masculine identity more deeply, and thus “better serve the human being as a whole.”

From the beginning of his pontificate, the pope has called for a renewed “theology of women.”

A certain “male chauvinist” mentality still persists, the pontiff laments, which turns women into objects of abuse, trafficking and profit. The place of women sometimes is reduced to roles of “servitude” rather than “true service.”

For example, when the pope was in Peru in January, he spoke about the role of women and the violence against them:

Appreciation and gratitude. But in thinking of our mothers and grandmothers, I want to invite you to combat a scourge that affects our American continent: the numerous cases where women are killed. And the many situations of violence that are kept quiet behind so many walls. I ask you to fight against this source of suffering by calling for legislation and a culture that repudiates every form of violence.

Read more:
Why “the Marian Option” is not optional today

Read more:
Need some motivation for Scripture study? How about Mary