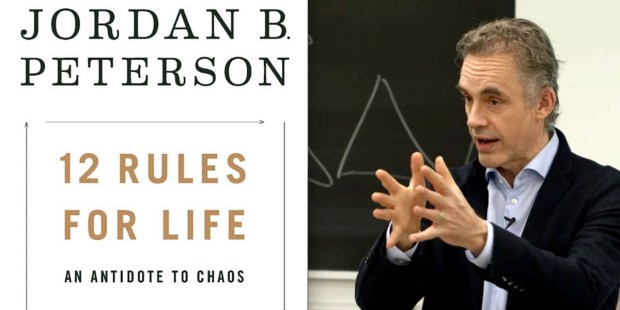 On the best-seller ’12 Rules for Life: An Antidote to Chaos’: I like this book and warmly recommend it.

Like many others, I have watched the Jordan Peterson phenomenon unfold with a certain fascination. If you don’t know what I’m talking about, you don’t spend a lot of time on social media, for Peterson, a mild-mannered psychology professor from the University of Toronto, has emerged as one of the hottest personalities on the internet. He is followed by millions of people, especially young men. His lectures and presentations—cool, understated, brainy, and blunt—are avidly watched and commented upon. And his new book, 12 Rules for Life: An Antidote to Chaos, is a number one bestseller all over the world. Moreover, Peterson’s spirited and articulate opposition to the imposition of speech codes in his native Canada has made him a controversial political player, a hero of free speech to his supporters and a right-wing ideologue to his detractors. His interview with Cathy Newman of Channel 4 News, during which Peterson’s interlocutor revealed herself as a hopelessly biased social justice warrior, has, as of this writing, been viewed 7.5 million times.

In many ways, Peterson is doing for this generation what Joseph Campbell did for the previous one, namely, reintroducing the archetypal psychology of C.G. Jung in an appealing and provocative manner. Jung’s theorizing centered around what he termed the archetypes of the collective unconscious, which is to say, those primordial instincts, insights, and memories that influence much of our behavior and that substantially inform the religions, philosophies, and rituals of the human race. The Jungian template enables Peterson to interpret many of the classical spiritual texts of Western culture in a fresh way—those very texts so often excoriated by mainstream intellectuals as hopelessly patriarchal, biased, and oppressive. It also permits him to speak with a kind of psychological and spiritual authority to which young people are not accustomed but to which they respond eagerly.