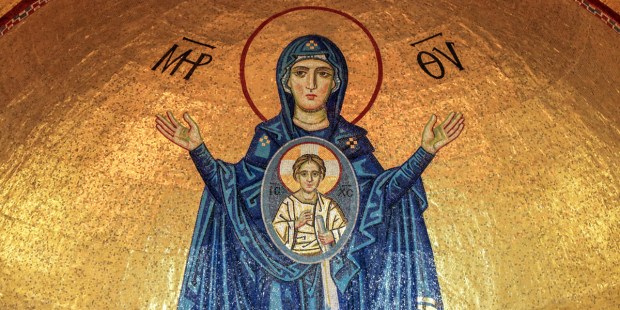 The Memorial of the Blessed Virgin Mary, Mother of the Church, has been inserted into the Roman Calendar on the Monday following Pentecost Sunday.

Today, Pope Francis has decreed that the devotion to the Blessed Virgin Mary, under the title of Mother of the Church, be inserted into the Roman Calendar.  The liturgical celebration, Beata Mariæ Virginis, Ecclesiæ Matris, is to be celebrated annually, as a Memorial. From this year, all the dioceses and parishes will celebrate this Feast the Monday following Pentecost. This official celebration underlines a characteristic of the Virgin Mary, who is both mother of Christ and of the Church.

Being a Memorial, this celebration includes its own readings. All calendars and liturgical books will thus include this memorial for both the Mass and the Liturgy of the Hours. The reading of the breviary, in fact, includes the text of Paul VI’s proclamation of Mary as Mother of the Church.

The Decree was released Saturday by the Congregation for Divine Worship and the Discipline of the Sacraments.

Cardinal Robert Sarah, its Prefect, explained the Pope’s decision is based on the ancient tradition built around the devotion to Mary as Mother of the Church. Cardinal Sarah also explained Pope Francis wishes to promote this devotion in order to “encourage the growth of the maternal sense of the Church in the pastors, religious and faithful, as well as a growth of genuine Marian piety,” Devin Watkins explained in an article published by Vatican News.

The decree itself revisits and explains the history of Marian theology in the Church’s liturgical tradition and the writings of the Church Fathers. It quotes Saint Augustine and Pope Saint Leo the Great’s reflections on the importance of the Virgin Mary not only in the life of the Church but also in the life of Christ Himself:

The decree explains such reflections are a result of the “divine motherhood of Mary and from her intimate union in the work of the Redeemer,” and explains Mary became Mother of the Church when, at the foot of the Cross (cf. Jn 19:25), she “accepted her Son’s testament of love and welcomed all people in the person of the beloved disciple as sons and daughters to be reborn unto life eternal.”

This decree was signed on February 11, 2018, feast of Our Lady of Lourdes. The liturgical texts, as well as their translations approved by the episcopal conferences, will be published after the confirmation of the Dicastery.

The full text of the decree can be read here.