The bra that can detect breast cancer 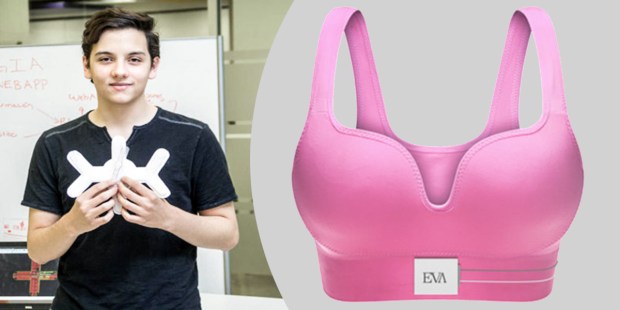 A man who nearly lost his own mother to the disease invented the wearable device.

A Mexican company, Higia Technologies, recently launched a new bra that detects breast cancer. They call it Eva and it promises to revolutionize the fashion market by linking it to health.

Eva has two patches with biosensors placed in a radial pattern around the user’s breasts. Cancerous tumors can cause the temperature of the skin to rise because of increased blood flow, so the sensors are set up to detect the heat level of the woman’s breast: if there are alterations that do not fit within the normal levels, the bra sends out an alert to the person’s mobile phone.

Read more:
After breast cancer: A fresh start for your body and your life

The inventor behind the smart bra, 18-year-old Julian Rios Cantu, almost lost his own mother to breast cancer. Motivated by the near miss, he began researching the disease and came up with the idea of the bra, which won him the Global Student Entrepreneur Award. After filing a patent, he got a few friends together, fellow students at the Technological Institute of Monterrey, to start the company, Higia Technologies.

Higia Technologies has created a database with information about the temperature of the breast tissue of many women. This now allows it to compare the information detected by the sensors to what is stored in the system and get results that can sound an alert to any suspicious temperature variations that go beyond the normal range.

A few words of caution apply: don’t wear the bra when doing physical activity, like going to the gym, since it can set off a false alarm. And it has to be worn for 60 to 90 minutes per week to get accurate measurements.

The bra, which is still in beta testing, is available for pre-order on the web site evabra.mx. In this first stage, they have manufactured 5,000 bras.

Read more:
Fighting breast cancer? Here is a patron saint for you