3 Ways to live like St. Francis while still being yourself 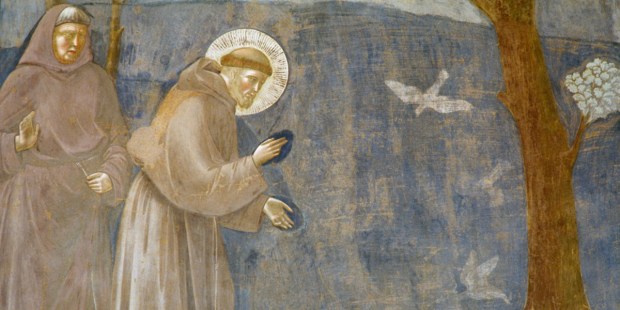 His life is full of powerful lessons, even for modern living.

“Shouldn’t we all be living like this?” Kirsten whispers to me as we walk down the central aisle of the Basilica of Saint Francis. I’m in Assisi leading a group of college freshman, including Kirsten, as part of a course on the Italian cultural legacy. We stop before a fresco in the upper nave, and gaze at Giotto’s image of one of the most important moments of young Francis’s life. Disturbed by his wealthy father’s lack of care for the church, Francis has renounced his family, even removing the garments his father had given him. Nearly naked in the town square, Francis declares his independence from his family and from the financial systems of the day.

“Yeah,” she says, nodding to the monk who gave us our tour. “Like him. Like Francis. Isn’t that the holiest way to live?”

I pause. It’s a good question.

“I don’t think so,” I answer slowly. “There is no ‘holiest’ way to live. Becoming a monk or a nun is the best way to live if it’s what God has called you to do, but God has a different calling for each of us. The holiest way to live is to follow the calling God has given specifically to you.”

In the bus on the way to Florence, we continue the conversation. After all, although we’re not all called to be St. Francis, there are certainly things we can all learn from his example.

Care for the Church and listening to God

The Saint of Assisi took Christ’s words seriously, believing that the poor are blessed, and that if you have two coats, you should give one away. He didn’t always, though: as a youth, he reveled in his wealth and popularity and became skilled in business. He was also eager to win glory as a knight. But as he left for his second battle, Francis heard a call from God to return to Assisi.

Over the next few years, his heart changed. He spent time alone in prayer and repentance. He encountered a leper and, instead of being repulsed, kissed the leper’s hand. While praying in the church at San Damiano, Francis heard the Christ on the crucifix say, “Repair my church.” Impetuously, Francis sold silks from his father’s shop, and gave the money to the church. This was what led to the scene in the town square, immortalized by Giotto and mesmerizing to us as we walked through the basilica.

After breaking ties with his family, Francis begged for stones and repaired the old church by hand. He told friends he planned to marry Lady Poverty, and began preaching. Others began to follow him, and Francis found their rule of life in the words of Jesus in the Scriptures — the command to the rich young man to sell all his belongings and give to the poor, and to the apostles to take nothing on their journeys, and to all of us to take up our cross daily. Francis asked his brothers to live in just this way.

If our children refused the material blessings we’ve given them, or gave away our savings to the Church, we’d likely be angry and confused, like Francis’ father. In our relative wealth and comfort, it’s easy to dismiss the radical call of Jesus. Francis reminds us, though, that the choice that seems counter-cultural and even crazy is sometimes the choice Jesus calls us to make.

Doing our part to care for creation

The way Francis related to animals must also have seemed bizarre to many people. Legend tells us that one day while traveling with some companions, Francis asked them to stop. He left the road and began to preach to the birds, who settled on his shoulders and arms, and did not fly away until he finished. Francis believed that nature was a mirror of God, and that, as he wrote in his “Canticle of the Sun,” all creatures were brothers and sisters.

Pope John Paul II taught that Francis’ love and care for creation ought to be a challenge for us and a reminder “not to behave like dissident predators where nature is concerned, but to assume responsibility for it, taking all care so that everything stays healthy and integrated, so as to offer a welcoming and friendly environment even to those who succeed us.”

Francis was not wrong to see the face of God in creation and like him we ought to be wise stewards of the earth, recognizing that through nature, God reveals himself to us.

Caring for one another

Later in his life, Francis felt called to take the gospel to Muslim lands. He set out towards Syria. At the Battle at Damiana during the Fifth Crusade, Francis made his way straight to the Sultan. Fearlessly, he shared the gospel with his enemy. While there’s no record of conversion, Francis established a peaceful relationship with the Muslim world that had far-reaching consequences. To this day Franciscans are recognized as the “Custodians of the Holy Land,” and permitted to represent the Catholic Church there.

It’s human nature to be afraid of those who are different from us, but Francis’ example can encourage us to seek relationships with those who are not like us — even our enemies.

As we departed Assisi, I don’t know if Kirsten and I came to any definitive conclusions about the way God calls us, but we left inspired by the example of a man who took Jesus’ words seriously. Francis’s life still invites us today to embrace simplicity and to care for the Church, the earth, and each other. That doesn’t always take the form of grand gestures. As Mother Teresa said, sometimes we’re called to do small things with great love; to simply do the next right thing, day after day, even if those right things are as mundane as homework assignments and dirty dishes, sharing a meal with the homeless or making friends with a refugee family.

We may want to be as radical and world-changing as St. Francis, but, as our tour guide Adam suggested in the bus that day, maybe prayerfully choosing love in everything we do is the kind of action that will change the world. That’s what Francis did, and almost a thousand years later we’re still talking about his incredible life.

Read more:
3 Lessons about minimalism from St. Francis of Assisi