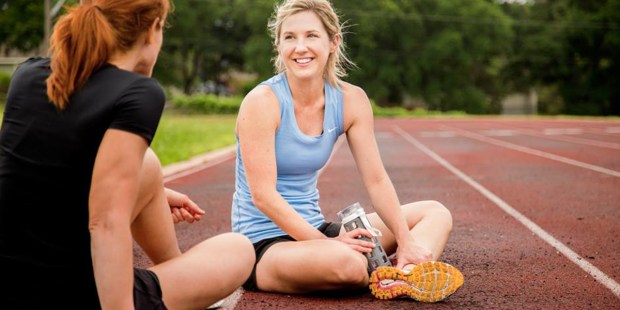 I noticed this effect even in the dead of winter.

We moved recently, which meant saying farewell to my beloved taekwondo and kickboxing gym. I knew I would have to find another way to stay active, but the martial arts places I found in my new areas were all prohibitively expensive. So it was with some trepidation that I let my sister talk me into trying Camp Gladiator.

If you don’t know what Camp Gladiator is, it’s basically exactly what it sounds like: an outdoor boot camp. However, it’s far less militaristic and far more social than the name implies … I’ve never been to a single camp where there wasn’t abundant laughter (and abundant sweat).

I’ve worked out and laughed with friends before, but always in a gym. I noticed right away that workouts at CG were very different. People were more relaxed, visibly displaying less tension in their body language and posture than even my friends at kickboxing, where we were practically a family.

I couldn’t figure it out at first. I thought it must be the specific trainer’s influence, but I started going to different trainers and found the same effect everywhere … with one notable exception: when the weather was awful and we were forced indoors, the atmosphere changed and the workout seemed harder. It was subtle but distinct — being outdoors somehow aided in relaxation and exercise.

According to Huffington Post, this is a natural result of being outdoors — nature makes exercise easier and reduces stress.

Research conducted at the University of Essex showed that the color green, such as that found on trees, grass and other plants in nature, makes exercise feel easier. The small study tested cyclists pedaling in front of green, gray and red images. Those exercising in front of the green showed less mood disturbances and reported that they felt lower exertion during their cycling. Plus, other research showed that those who exercise outside are more eager to return for a future workout than those who stick to the gym …

Spending time in nature has been shown to lower stress levels, Seattle-based environmental psychologist Judith Heerwagon tells The Huffington Post. “Just looking at a garden or trees or going for a walk, even if it’s in your own neighborhood, reduces stress,” she says. “I don’t think anyone understands why, but there’s something about being in a natural setting that shows clear evidence of stress reduction, including physiological evidence — like lower heart rate.”

The weirdest thing about this effect is that I didn’t notice it on a beautiful spring day, when your heart can’t help but lift in response to the sun shining and the birds singing. I noticed it in the middle of one of the worst winters north Texas has had in years, in bitterly cold temperatures and absolute downpours. I laughed more during the workout when it was raining so hard that we lined up cars, opened the trunks, and exercised under the hatchbacks than I’ve laughed in a long time.

I don’t know what it is about being outside that helps people relax, but I’ve since noticed the effect everywhere, not just at Camp Gladiator. It’s far easier to strike up a conversation with a stranger outdoors than indoors. I feel more comfortable outdoors, less self-aware and more confident. I also just feel happier, even when it’s cold (though not always when it’s raining buckets).

One of the CG catchphrases is “take it outside!” and I’m starting to realize that it’s more than just clever marketing … it’s a clever way to live. We are happier, healthier, and less stressed when we get outside — whether or not we’re doing burpees!

Read more:
Sleep or exercise? Which should you choose on your busiest days?