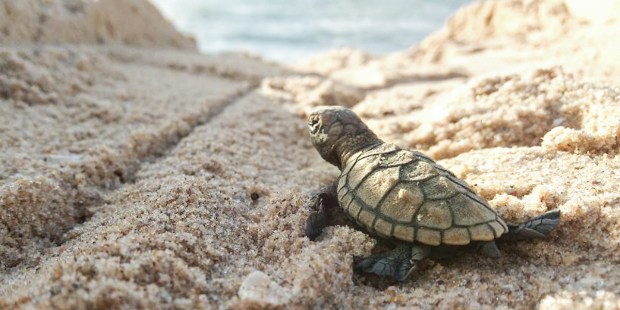 My rage about the plight of baby sea turtles changed my behavior where it matters most.

I will admit, I have a very hard time keeping my focus during a long homily. As the congregation takes their seats after the Gospel the church becomes a wonderland of distraction: The stained glass images as the sun shines through, the idle whispers coming from fellow congregants, even a cobweb hanging from a chandelier can throw me off. It’s because of this that sometimes God has to give me a metaphorical slap to the back of the head to break me out of my trance.

But let’s back up a bit.

Last month I found myself reaching the frustrating point that every Millennial worth their salt reaches; I had run out of bingeworth TV shows to watch on Netflix. It took a little looking, but I finally settled on Planet Earth II. The new BBC series boasted new technology that allowed them to use motion sensors to capture footage that no one else had ever seen. What a treat!

Along with the breathtaking panoramic views of natural and man-made landscapes the narrator peppered in grave warnings about the detrimental effects man can have on wildlife. One example they used was Christmas Island, in the Indian Ocean. Christmas Island is a haven for many types of crabs, which have come under attack from foreign invaders: ants which arrived on human transports. The ants attack the turtles, who migrate through their territory and with no natural defense, the crabs lose a significant portion of their numbers each year.

I understood and agreed with BBC’s call to action that “humans brought these ant invaders here and now humans are having to control them.” Of course we should fix the problems that we’ve made in the world. That seems like a no brainer.

It wasn’t until the very last episode that I became outraged. You see, another animal that has been affected by human development is the hawksbill sea turtle. The baby turtles hatch on the beach and are guided to the sea by the light of the moon. However, due to light pollution from cities, the turtles often become confused and walk toward the bright electric lights and use what little strength they are born with to walk the wrong way.

I was horrified as I watched footage of these little critters wandering into streets, being run over by cars or becoming trapped in sewers. My fury grew with each cut of the film. How could BBC chastize the viewers for not intervening when they’re monatizing the deaths of thousands of baby turtles? This certainly seems like a man-made problem, is it not up to us to fix it? They were right there! Couldn’t they have brought some buckets and saved some of the turtles?

Of course this was a month ago and was far from my mind when the deacon stepped up to give his homily and my eyes began darting around to find this Sunday’s distraction. It was just when my mind began to drift when the deacon began to tell a story … about the hawksbill sea turtles and their plight.

For a moment my fury returned, my head filling with the same outrage I felt a month before. But then I stopped and had to smile. This was clearly meant for me. My attention became rapt as he used the story to illustrate that we must not allow our technology to distract us from the Light. We must keep our eyes on what is real and not be deterred from the paths we are meant to walk.

I took so much more away from that Mass than I ever expected. I must strive to keep my mind on what is before me, lest I miss the point while looking for something more, particularly matters of the spirit. Maybe the next time I’m looking for TV to distract my mind, I’ll take that as a cue to pick up my rosary instead.