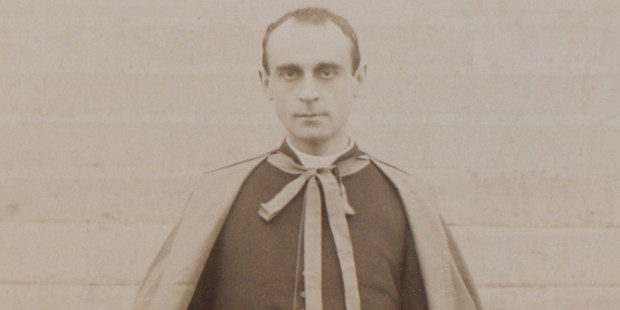 Though he was St. Pius X’s secretary of state, he is best known for this prayer against pride.

We Catholics have many litanies we turn to in time of celebration or need. One of these is not perhaps well-known, but growing in popularity. I find it among the most beautiful in the list of litanies we have available to us. It is the Litany of Humility. And most folks attribute it to the pen of the most humble of all cardinals, Merry del Val.

“That others may be praised and I unnoticed, Jesus, grant me the grace to desire it.” This is just one of the striking invocations in this line-up of petitions asking God to sap the strength our pride, the root and crown of all our sins.

Rafael Merry del Val y Zuelta was the second of four sons born to Carlos Merry del Valas and  Sofia Josefa de Zulueta. Rafael was born in the Spanish embassy in London, England, in 1865. The unusual surname “Merry” came from Irish merchants who had settled in Seville, Spain, in the 18th century. His family could trace their lineage back to the 12th century.

Living and growing up in London allowed for young Rafael to receive the best academic training offered by the British schools. However, despite his aristocratic background, the boy always displayed a genuine and personal humility tempered by integrity and modesty that he carried throughout his life.

From an early age, Rafael felt the call to the priesthood. He attended a Jesuit preparatory school and from there went on to Upshaw College. He already had earned a Doctorate in Philosophy at the Pontifical Gregorian University when he was ordained to the priesthood on December 30, 1888. He followed by earning a Doctorate in Theology and then a Licentiate in Canon law. He was already visible on Pope Leo XIII’s radar.