Pope praises nurses, remembers one who saved his life 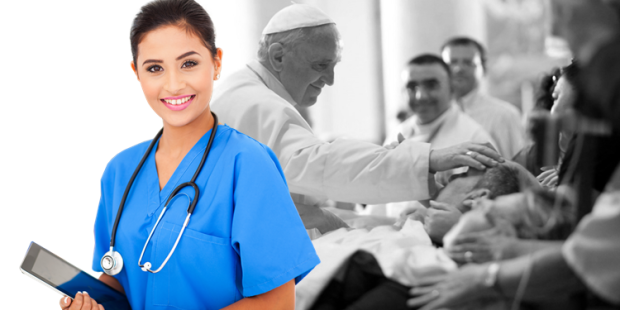 Recalls her as: A great woman, brave too, to the point of arguing with the doctors. Humble, but sure of what she was doing.

Pope Francis received Italian representatives of the nursing profession on March 3, in an audience at Paul VI Hall, according to a report from the Vatican press office. “You are promoters of life and of the dignity of the person,” said the Sovereign Pontiff.

Departing from his prepared text, Pope Francis paid tribute to an Italian nurse who saved his life in Argentina, Sister Cornelia Caraglio. Referring to her example, and underlining her humility and professionalism, the Bishop of Rome thanked all those who save lives.

“With your permission, I’d like to pay tribute to a nurse who saved my life. She was a religious nurse: an Italian Dominican sister, who was sent to Greece as a professor, highly educated… But as a nurse, then, she arrived in Argentina. And when I, at the age of twenty, was at the point of dying, she was the one to tell the doctors, even arguing with them, ‘No, this isn’t right, we need to give more.’ And thanks to those things, I survived. I thank her so much! I thank her. And I’d like to say her name here, in your presence: Sister Cornelia Caraglio. A great woman, brave too, to the point of arguing with the doctors. Humble, but sure of what she was doing.”

Francis emphasized the “precious work” done every day for the sick.

In daily contact with patients, said the pope, “you should be able to recognize the proper limits of technical” means of treatment. Technology cannot become an “absolute,” putting human dignity in the background, he explained. Many patients also have a “desire for spirituality” and “religious assistance,” he also said.

“Do not forget the medicine of the caress,” said Pope Francis, to the applause of the those present. It allows the sick to feel accompanied. By living alongside the sick, health officials develop human relationships whose key is “tenderness,” according to the Supreme Pontiff. “Tenderness goes from heart to hands” and makes it possible to “touch wounds with respect and love.”

Throughout his ministry, “Jesus was close to the sick,” recalled Peter’s Successor. That is why, for the Church, the sick are people in whom Christ is especially present. Christ has even identified himself with them by saying: “I was sick and you visited me.”

The pope also lamented the risks and difficulties of the work of the caregivers, as well as the “lack of personnel” which this profession suffers, a remark hailed by approving shouts from the audience.