Following in the footsteps of the snowshoe priest, leaving modern gadgets behind 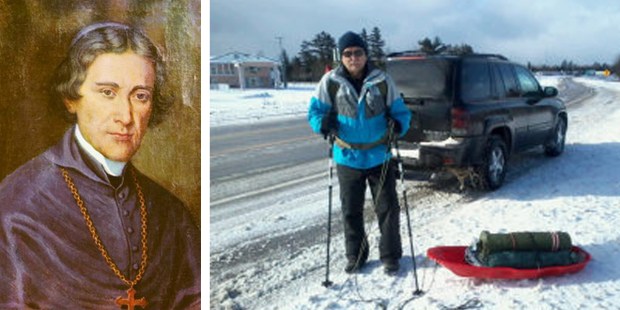 What do a 19th-century Slovenian missionary and a 21st-century descendant of Ottawa Indians have in common? They’ve both walked hundreds of miles over the snow during northern Michigan’s harsh winters, motivated by their love for Christ and desire to share their Catholic faith.

Seven years ago, 64-year-old Curtis Chambers of Cheboygan, Michigan, was serving as tribal chairman of the Burt Lake Band of Ottawa and Chippewa Indians and researching his tribe’s history. He came across an 1840 letter written by Venerable Frederic Baraga (1797-1868), the first bishop of the Diocese of Marquette, Michigan. In it, he asks the tribe to show hospitality to a priest he assigned to serve them.

Chambers began reading more and more about Baraga, and was impressed with what he learned: “He was tenacious. The man did not quit. He must have had an incredible faith to come here from Europe in the first place. He didn’t know if he’d be martyred; he trusted in God.”

Baraga is known as the “snowshoe priest,” due to the many miles he’d travel during the region’s hard winters. Chambers, an avid outdoorsman, decided to walk the same routes Baraga once walked, even using the same maps Baraga used.

Chambers was recently a featured speaker at the Diocese of Marquette’s commemoration of the 150th anniversary of Baraga’s death, leaving participants marveling at stories of his travels.

Len McKeen, director of the Bishop Baraga Association, related, “Curtis is amazing. He goes out there in the middle of nowhere, without the aid of modern technological gadgets.”

Chambers typically takes his “Baraga treks” in February (although this year in March), and heads out regardless of the weather. He once walked 30 miles in a single day, but ended the day hyperventilating and hallucinating. Today, he keeps it to 20 miles or less. He’ll walk into a blizzard, but admits “if it’s 20 below zero or less, I’ll stay put for the day.”

This year, he’ll take a “short trip” of only 130 miles. He’ll take with him modest supplies, including his snowshoes, food, a tent and a sleeping bag. The sleeping bag keeps him warm up to 35 degrees below, which along with the tent is a big advantage he has over Bishop Baraga. He explained, “The bishop had only a tarp to put over his head and a blanket to wrap around himself. I feel pretty spoiled.”