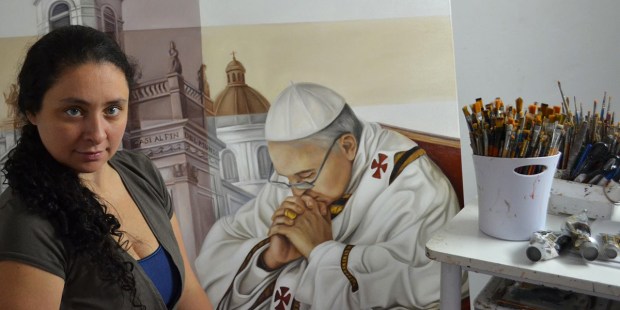 “The gifts that you have received are, for each of you, a responsibility and a mission”

Pope Francis met with some two dozen artists from various countries around the world, to ask them to help communicate the beauty of transcendence through their artistic language.

He was speaking to leaders of the “Diakonia of Beauty,” a movement born and developed to help artists from all of the arts to come out of their isolation, which is often due to the commercial dynamics tied to artistic production.

The initiative was created and promoted by Anne and Daniel Facerias together with Bishop Dominique Rey of the diocese of Fréjus-Toulon (France) in Rome in 2012, and has as its president Cardinal Paul Poupard, President Emeritus of the Pontifical Council for Culture. It offers artists opportunities for sharing, formation, and mutual support, so that they may become witnesses to the beauty of God through art.

Read more:
Meet the painter behind this stunning new image of the Immaculate Heart

As explained by the founder, Anne Facerias, “the Diakonia—which means ‘service’ in Greek—aims to be a service to help artists to find the path of faith, to restore to them their role as mediators between heaven and earth.”

During the meeting, which took place February 24, the Holy Father underlined how “the gifts that you have received are, for each of you, a responsibility and a mission. You are asked to work without letting yourselves be dominated by the search for vainglory or easy popularity, and even less by the often petty calculus of personal profit.”

Through the Diakonia in particular, he invited all the artists “to promote a culture of encounter, to build bridges among individuals, among peoples, in a world in which so many walls are still being raised out of fear of others.”

Read more:
Sacred artists have an insight into the Holy Family that we should remember

A turning point for the Church-art relationship

Anne Facerias told Aleteia that “our meeting with the Holy Father marks a true turning point in the life of our movement, and roots us even more in the heart of the mission of the universal Church.”

An example of the fruitful collaboration of Pope Francis with artists at the service of sharing beauty is a small but great treasure, “Icon of Mercy,” a pamphlet that helps people to rediscover the figure of the merciful Jesus through art and meditations.

It is a work that Pope Francis distributed to people in Rome living in poverty, last January 6, 2017. It was prepared by Fr. Pietro d’Angelo, Diakonia of Beauty’s spiritual guide and the ecclesiastical consultant of the Catholic Union of Italian Artists of Benevento.

Read more:
What is the best way to support Catholic arts and letters?

During the meeting, the artists had the satisfaction of being able to give the French edition of this work to the Pope as a gift.

Among the outstanding names of members of the organization, we can mention the actor Michael Lonsdale, known worldwide for his role as a James Bond villain and for his starring roles in films including “The Name of the Rose” and “Of Gods and Men.”

This article is translated and adapted from Aleteia’s Italian edition.