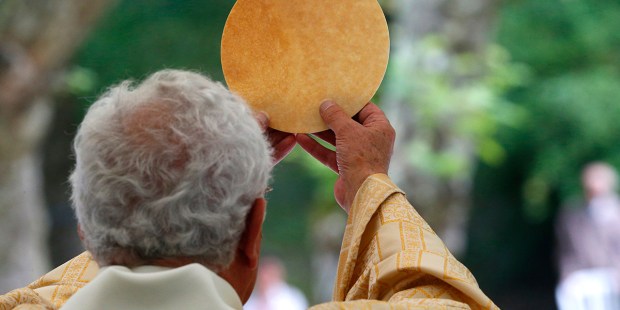 At audience, looks at meaning of Eucharistic prayer, Mass in the vernacular, and how a Mass can’t be purchased

The Eucharist is the body of Jesus, as he himself told us, and this we can accept “without strange thoughts” about how or why or through what mechanism. “It is the body of Jesus; it finished there! Faith: faith comes to our aid; with an act of faith we believe that it is the body and blood of Christ,” Pope Francis affirmed today.

The pope said this as he continued his general audience series on the parts of the Mass, today beginning with a look at the Eucharistic Prayer.

This part of the Mass “corresponds to what Jesus Himself did, at the table with the Apostles in the Last Supper, when He gave thanks over the bread and then over the chalice of wine: His thanksgiving is relived in every Eucharist, associating us with His sacrifice of salvation,” the pontiff explained.

“Communion is made with Christ truly present in the consecrated bread and wine,” he continued.

Citing the General Instruction of the Roman Missal, the Bishop of Rome noted how this prayer is said by the priest aloud, in the name of all those present, and “the entire congregation of the faithful should join itself with Christ in confessing the great deeds of God and in the offering of Sacrifice.”

“And to join,” Francis said, “it must understand,” saying this is why the Church “wished to celebrate Mass in the language that the people speak, so that each person can join in this praise and in this great prayer with the priest.”

The pope spoke about the preface, the singing of the “Holy, holy” and then the invocation of the Spirit, “so that by its power the bread and wine are consecrated.”

“The action of the Holy Spirit and the efficacy of Christ’s own words uttered by the priest make truly present, in the form of bread and wine, His Body and His Blood, His sacrifice offered on the cross once and for all,” he said. “Jesus was very clear about this. We have heard how St. Paul, at the beginning, recounts Jesus’ words: ‘This is my body, this is my blood.’ ‘This is my blood, this is my body.’ It is Jesus Himself Who said this. We must not have strange thoughts: ‘But, how come something that…’ It is the body of Jesus; it finished there! Faith: faith comes to our aid; with an act of faith we believe that it is the body and blood of Christ. It is ‘the mystery of faith,’ as we say after the consecration.”

At Mass, the Church “offers the Father the sacrifice that reconciles heaven and earth … we nourish ourselves with the Body of Christ to become, we who eat it, His living Body today in the world.”

To be the prayerful Church

The Successor of Peter noted how in the Catacombs, the Church is often represented as a woman in prayer, arms outstretched in the praying position — the Church who prays.

“It is good to think that the Church prays. There is a passage in the Book of the Acts of the Apostles; when Peter was in prison, the Christian community ‘joined constantly in prayer.’ The Church that prays, the prayerful Church. And when we go to Mass it is to do this: to be the prayerful Church,” he said.

The Holy Father also spoke about how prayer is made for all members of the Church, living and deceased.

“No one and nothing is forgotten in the Eucharistic prayer, but everything is redirected to God, as the concluding doxology recalls. No one is forgotten. And if I have someone — relatives, friends — who are in need or who have passed from this world to the other, I can name them in this moment, inwardly and in silence, or I can write for the name to be mentioned.”

Read more:
The Eucharist: Heinous Blasphemy or the Most Wondrous Thing on the Planet?

In this regard, the pope said that there is no fee for having a Mass said. “You do not pay for Mass. Mass is Christ’s sacrifice, which is free. Redemption is free. If you want to make an offering, do so, but you do not pay. It is important to understand this.”

The pope concluded with this reflection:

We may feel a little distant from this codified formula of prayer – it is true, it is an ancient formula – but if we understand its meaning well, then certainly we participate better. Indeed, it expresses all that we fulfil in the Eucharistic celebration, and in addition it teaches us to cultivate three attitudes that must never be lacking in Jesus’ disciples. The three attitudes: first, learning to “give thanks, always and everywhere,” and not only in certain occasions, when everything is going well; secondly, making our life a gift of love, freely given; and third, building real communion, in the Church and with all. So, this central prayer in the Mass educates us, gradually, to make all our life a “Eucharist,” that is, an act of thanksgiving.

And check out the previous catecheses on the Mass in this Wednesday audience series: