A potential buyer is interested in giving the Ursuline Sisters' former home another chance, and it couldn't be more perfect.

What happens to a 36-acre convent when the nuns move out? It’s not easy to just put up a for sale sign and sell a multi-million dollar property these days. That’s why the Ursuline Academy in Paola, Kansas, has pretty much been sitting vacant these past 10 years. The property and facility, which was once used as a Catholic grade school and at one time a college, is way too big or has the wrong infrastructure for most businesses and agencies.

But the bucolic and reverent setting teaming with history is the perfect size and setup for children in the foster care system who don’t have permanent homes and will soon be turned out onto the streets as “adults.”

That’s what Darol Rodrock is banking on, anyway. Rodrock is a successful businessman from Kansas, one of the largest real estate developers in Johnson County — and a former foster child himself.

One of the descriptions of the Ursuline building is by a former nun who researched the history: “The auditorium, which occupied the first and second floors, was one of the finest west of the Mississippi River and was unequaled for the beauty and detail of its workmanship. Surrounding the auditorium were the music rooms and on the third floor were the dormitories and private rooms.”

His expertise in the home-building industry aside, Rodrock knows the value and meaning of having a stable home — because he didn’t have one early in life. Unwanted by his biological parents, and shuttled from one abusive care situation to another, Rodrock eventually found a soft and welcoming landing in Lavon and Ray Robinson, foster parents who lovingly opened their home to the struggling 13-year-old. The experience made such an impact that Rodrock formed the Darol Rodrock Foundation on his 70th birthday, and is dedicated to projects that improve the lives of children in the foster system.

At one point, there were 150 Ursuline sisters teaching at the Academy and their other parish schools in Kansas City, Wea, and Garnett, Kansas, and Tulsa and Oklahoma City, Oklahoma. It’s estimated that the nuns have educated over tens of thousands of students in these schools up until about the 1970s, when enrollment started to the decline. The nuns have since merged with another convent in Kentucky, and now the hope is that the sale of the property would at least pay for retirement costs, as well as carrying on the convent’s legacy in some way.

Giving kids like Darol Rodrock a home that can provide chances they wouldn’t ordinarily have could not be a better way to keep the spirit of the Ursuline Sisters in Paola alive.

Here’s an up-close look at the convent: 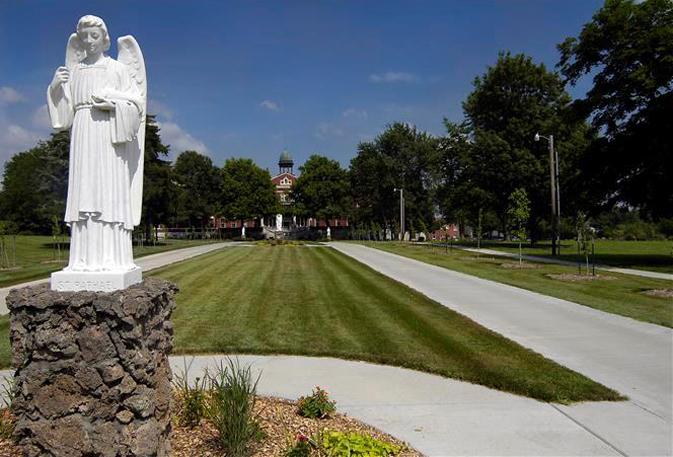 Read more:
Nuns Fight To Keep Their Convent Out Of Katy Perry’s Hands