‘This journey must go on!’ If you haven’t read John Paul II’s Letter to Women, don’t miss it 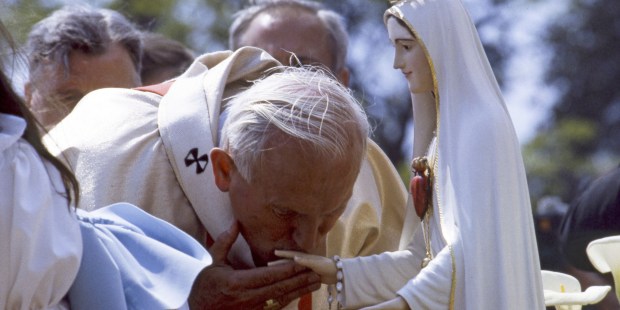 It was written in 1995, but the relevance of John Paul II’s Letter to Women is as clear as ever, perhaps more so in the wake of #metoo.

The Polish pope often turned his moral authority to the issue of women. He was the first pope to dedicate an apostolic letter to the theme, in 1988, with the lengthy and profound Mulieris Dignitatem.

But his brief Letter to Women, in which he references his World Day of Peace message of the same year, also dedicated to women, is a short read, perfect for this international day. It was written in the lead-up to the UN’s Fourth World Conference on Women, held in Beijing that September. It gives perspective on the struggles women have endured since Original Sin, and the path forward. “The journey,” the saint pope says, “must go on!”

Here is an extract:

Unfortunately, we are heirs to a history which has conditioned us to a remarkable extent. In every time and place, this conditioning has been an obstacle to the progress of women. Women’s dignity has often been unacknowledged and their prerogatives misrepresented; they have often been relegated to the margins of society and even reduced to servitude. This has prevented women from truly being themselves and it has resulted in a spiritual impoverishment of humanity. Certainly it is no easy task to assign the blame for this, considering the many kinds of cultural conditioning which down the centuries have shaped ways of thinking and acting. And if objective blame, especially in particular historical contexts, has belonged to not just a few members of the Church, for this I am truly sorry. May this regret be transformed, on the part of the whole Church, into a renewed commitment of fidelity to the Gospel vision. When it comes to setting women free from every kind of exploitation and domination, the Gospel contains an ever relevant message which goes back to the attitude of Jesus Christ himself. Transcending the established norms of his own culture, Jesus treated women with openness, respect, acceptance and tenderness. In this way he honoured the dignity which women have always possessed according to God’s plan and in his love. As we look to Christ at the end of this Second Millennium, it is natural to ask ourselves: how much of his message has been heard and acted upon?

Yes, it is time to examine the past with courage, to assign responsibility where it is due in a review of the long history of humanity. Women have contributed to that history as much as men and, more often than not, they did so in much more difficult conditions. I think particularly of those women who loved culture and art, and devoted their lives to them in spite of the fact that they were frequently at a disadvantage from the start, excluded from equal educational opportunities, underestimated, ignored and not given credit for their intellectual contributions. Sadly, very little of women’s achievements in history can be registered by the science of history. But even though time may have buried the documentary evidence of those achievements, their beneficent influence can be felt as a force which has shaped the lives of successive generations, right up to our own. To this great, immense feminine “tradition” humanity owes a debt which can never be repaid. Yet how many women have been and continue to be valued more for their physical appearance than for their skill, their professionalism, their intellectual abilities, their deep sensitivity; in a word, the very dignity of their being!

4. And what shall we say of the obstacles which in so many parts of the world still keep women from being fully integrated into social, political and economic life? We need only think of how the gift of motherhood is often penalized rather than rewarded, even though humanity owes its very survival to this gift. Certainly, much remains to be done to prevent discrimination against those who have chosen to be wives and mothers. As far as personal rights are concerned, there is an urgent need to achieve real equality in every area: equal pay for equal work, protection for working mothers, fairness in career advancements, equality of spouses with regard to family rights and the recognition of everything that is part of the rights and duties of citizens in a democratic State.

This is a matter of justice but also of necessity. Women will increasingly play a part in the solution of the serious problems of the future: leisure time, the quality of life, migration, social services, euthanasia, drugs, health care, the ecology, etc. In all these areas a greater presence of women in society will prove most valuable, for it will help to manifest the contradictions present when society is organized solely according to the criteria of efficiency and productivity, and it will force systems to be redesigned in a way which favours the pro- cesses of humanization which mark the “civilization of love”.