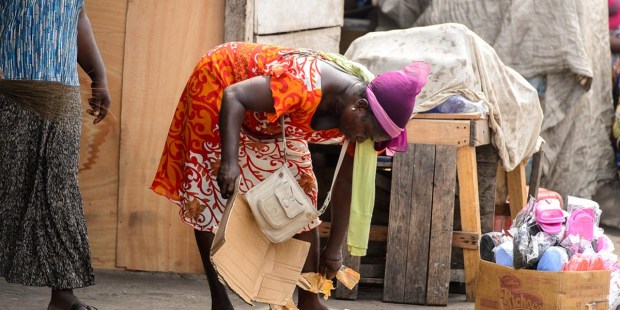 Quitting this bad daily habit can prevent back pain and spinal problems.

At Camp Gladiator, we do a dynamic stretch called a “good morning.” It’s one of my favorite things to do and I get ridiculously excited when it’s part of the warm-up, because it feels absolutely glorious.

Here’s how to do it (since I know you want to try now!): Stand with your feet a little wider than shoulder width apart, put your hands behind your head, and hinge forward at the hips. But you have to hinge, not bend — your back must be straight, like a tabletop, to get that good stretch down through the back of your hamstrings.

Feels glorious, right? Doesn’t your morning feel pretty good after doing that stretch? I know mine always does. I’ve even started doing it in the kitchen before I pour my coffee — it’s that much of a game-changer.

Turns out, we should all be doing this in the morning. We should be doing it all day every day, in fact — this is how our bodies are meant to bend.

Many cultures have preserved the art of bending. In fact, the reporter who wrote this NPR article about how we should (and should not) be bending over first noticed this phenomenon in Liberia, when he was covering the Ebola outbreak.

But it isn’t limited to Africa — Asian people bend this way as well, hinging from the hips with a flat back rather than curving their spines the way we do. And there’s a reason for it — our spines are literally not meant to bend that way, according to Stuart McGill, a researcher at the University of Waterloo who has spent the last 30 years studying the biomechanics of the spine:

When people bend with the cashew shape in their back — like we often do — they’re bending their spine. “That puts more stress on the spinal disks,” McGill says.

Disks are little rings of collagen found between each vertebra, which form a joint. But they aren’t made for tons of motion. “They have the mechanical characteristics of more like a fabric,” McGill says.

“If you took a cloth, and you kept bending and stressing it, over and over again, the fibers of the weave of the cloth start to loosen up and delaminate,” he says. Eventually, over time, this fabric can fray, which puts you at risk of slipping a disk or having back pain.

In contrast, the hip is made to bend. It’s a ball-and-socket joint — one of the few joints in the human body designed for maximum rotation. It’s also supported by the large muscles of the legs, including the hamstrings that run up the back of the thighs. One of the reasons McGill and other researchers believe that Western countries have lost the art of hinging at the hips is  because we have chronically tight hamstrings, which inhibit proper hinging.

The question is, which came first — the lost art of hinging, or the tight hamstrings? Like most things, I imagine it’s a little of both. But it’s precisely the way it loosens the hamstrings that make the good morning stretch so glorious.

So try incorporating a few good mornings into your day, and maybe even work your way up to hinging forward to pick up the pencil your son dropped on the floor, rather than curving forward. Both your hamstrings and  your spine will thank you!

Read more:
Could your child’s backpack be injuring their spine?