Pope: Young priests have an advantage with the young, but also a handicap 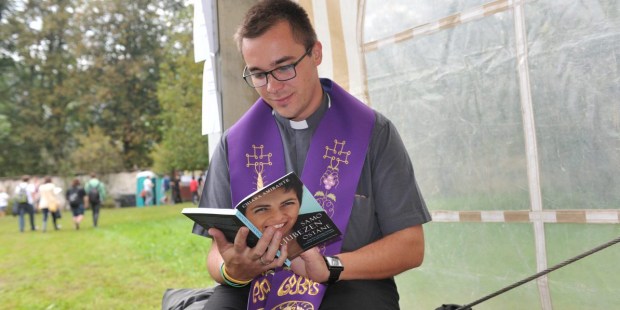 In moving message to confessors and future confessors, Francis reminds them to master the art of listening

Pope Francis today offered advice to priests in their ministry as confessors, warning them against giving themselves too much importance, and also emphasizing the importance of listening. He was speaking particularly about confession in the role of vocation discernment.

The pope was addressing an annual course held by the Vatican’s Apostolic Penitentiary.

He said that young confessors and future confessors have the advantage “of being young, and therefore of being able to live the sacrament of Reconciliation as ‘young among the young.'” Proximity in age, the pope reflected, often “favors sacramental dialogue too, due to the natural affinity of language.”

Nevertheless, Francis reminded, this youthfulness also has limits and “even risks,” because “you are at the beginning of your ministry and therefore you still have to acquire all the experience that a ‘consummate confessor’ has after decades of listening to the penitents.”

So then, the pope suggested, two elements can help to live this circumstance. The first is awareness of the priest’s true role in confession.

“The priest-confessor is the source of neither mercy nor grace: he is certainly the indispensable instrument, but always only an instrument,” he said. He warned against trying to become what he called a “master of conscience,” especially with young people “whose personality is still being formed and is therefore far more easily influenced.”

“Remembering to be, and having to be, only instruments of Reconciliation is the first requirement for assuming an attitude of humble listening to the Holy Spirit, which guarantees a genuine effort of discernment. Being instruments is not a diminution of the ministry, but, on the contrary, it its full realization, because to the extent that the priest disappears and Christ the Supreme and Eternal Priest appears more clearly, our vocation of ‘useless servants’ is realized,” he said.

In touch with Jesus

Then, Francis continued, is the importance of listening, and specifically knowing “how to listen to questions before offering the answers.”

In relation to vocational discernment, he said that this is “first of all a reading of the signs which God Himself has already placed in the life of the young, through personal qualities and inclinations, through encounters, and through prayer: a prolonged prayer, in which there are repeated, with simplicity, the words of Samuel: ‘Speak, Lord, for your servant is listening.'”

“The colloquy of sacramental confession thus becomes a privileged opportunity for encounter, for both penitent and confessor to listen to the will of God, discovering what His plan may be, regardless of the form of the vocation,” the Holy Father reflected.

“Dear young priests, future priests and dear Penitentiaries, be witnesses of mercy, be humble listeners to the young and to God’s will for them, always be respectful towards the conscience and freedom of those who approach the confessional, because God Himself loves their freedom,” Francis concluded. “And entrust penitents to she who is the refuge of sinners, and Mother of mercy.”

Read more:
Do you see confession as a chance for coffee with Our Lord? Pope Francis suggests you could