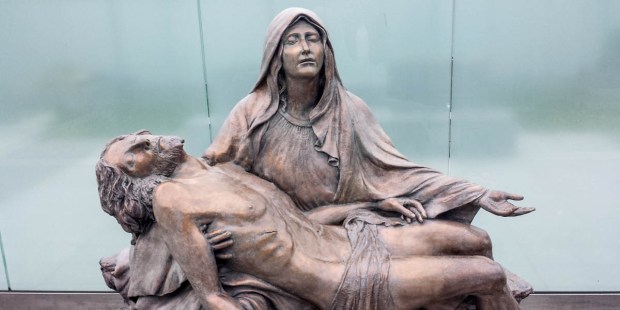 A lesson learned from a new rendering of the Pieta, hidden away in Alaska.

I’ve prayed before Michelangelo’s Pietà. I’ve gasped at the majesty of the David. I’ve stared in wonder at Bernini’s Daphne and Apollo. I’ve been in the Louvre and the National Gallery and the Met and the Vatican Museums.

I think the most beautiful statue in the world is in a parish church in Anchorage, Alaska.

Four years into my hobo missionary adventure, I’d visited 49 states and 20 countries. I’d seen some of the most beautiful churches in the world and admired the artwork of all the great masters.

Then I visited St. Patrick Catholic Church in Anchorage.

I’d expected to be stunned by the natural beauty of the Land of the Midnight Sun, and I hadn’t been disappointed. I flew over Mount Denali, hiked a glacier, went deep sea fishing, and got too close for comfort when a mama moose and her baby were taking a walk.

And then I stopped by a suburban parish. A man who worked for the church took me into a fairly nondescript sanctuary, then through a courtyard, where we walked past a statue of the Pietà.

I stopped in my tracks. I held out my hand to the man I’d just met—“I’m sorry. Just—please.” I needed silence.

There before me was the traditional image of the Virgin Mary holding the corpse of her son. I’d seen it a thousand times, in churches and calendars. I even had a little plastic copy on my desk when I was a teacher. This was just like it—a youngish woman holding the nearly-naked body of a crucified man. It was Michelangelo’s image, right down to the abundant folds of fabric.

And it was entirely different.

The overall feeling of Michelangelo’s masterpiece is sorrow. Mary holds her son and mourns, her face downturned and veiled by the shadows cast by the natural light that originally illuminated the piece. Though her hand is held open, implying acceptance of the sword that has pierced her heart, it’s held up only weakly.

It’s a true portrait, a beautiful image of Mary’s pain.

But the bronze piece in Alaska, sculpted by American Roberto Santo, isn’t an image of a mother’s sorrow. Not entirely, anyway.

In this piece, Our Lady of Sorrows worships.

Mary’s head is tilted up toward heaven, her lips slightly apart as though breathing in the Holy Spirit. Her right hand clutches her son, but her left hand is raised in praise of the Father. There in her shattering pain, she is praising God.

If Michelangelo’s Pietà is an image of sorrow, Santo’s is an image of surrender. The Virgin Mary, who said yes to the Father’s will at the annunciation, yes in Bethlehem, yes while fleeing into Egypt, yes every day of her life with Christ, is again saying yes. As she watched her son suffocate under the weight of the world’s sin, Mary said yes. She embraced the Father’s will for her only Son, just as she had every day since his conception. And when he was taken down from the Cross and handed to her, she clung to him as any mother would and offered him to the Father as only one full of grace could.

Read more:
Do you know what it is to adore God? Pope says we must learn, because that’s what we’ll do in heaven

With her face tilted up and her hand held out, Mary seems to be basking in the radiant love of the Father, though even that can’t transform her agony into delight. Still, as her life is seemingly emptied of meaning, she is filled. As she holds her dead Son, she is held.

As I stood there in silence, heedless of how awkward that moment ought to have been, this is what I saw: in the moment of her greatest pain, the Blessed Mother said yes to the Father and found that she could still praise him.

I keep going back to that statue—by flying to Alaska and by scrolling through my pictures. I keep sharing the image on Instagram. I keep pulling it out to meditate on in adoration. We all of us stand in solidarity with Our Lady of Sorrows at one point or another. We watch our children die, we suffer betrayal, we agonize over diagnoses. To be a human being is to suffer.

But when we look at our Mother, we see that suffering doesn’t have to destroy us. It doesn’t have to define us. When we’re living for the Lord, suffering is still ugly and it still hurts. But even in that anguished moment, that pain can be transformed into the joy and peace and surrender of this Alaskan Pietà. With Mary, we can say, “Yes, Father,” we can choose to praise him and find a sense of the peace that comes of knowing how wildly we are loved.