Climbing a 400-meters-tall cliff to get baptized in Ethiopia 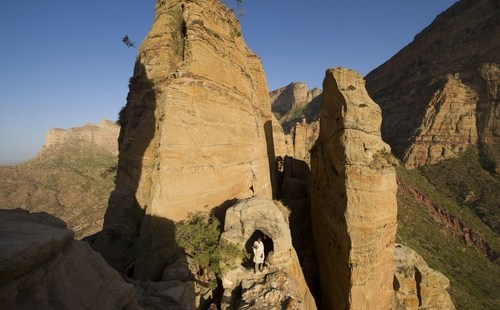 Dawit is now 40 days old. And it’s time for his baptism.

Maybe you’ve read about the Abuna Yemata Guh, the “Church in the sky,” recently. Carved in a cliff by St. Abuna Yemata in the 6th century, when he arrived in the region from Syria, reaching this church implies a long, vertiginous climb.

It is customary to make the ascent into the church barefoot and with no ropes. The local Christian tradition claims the “Nine Saints” (the original group of missionaries from the 5th century who fostered the growth of Christianity in what is now Ethiopia) protect those who climb these cliffs.

Read more:
This priest climbs a steep cliff every day to get to church (VIDEO)

For centuries, the priests who came here to care for this church have also been buried in it. But none of them has ever died, tripped, or had an accident during the ascent. “The nine saints who live in these mountains have kept them safe,” smiles Father Haylesilassie Kahsay, an Ethiopian Coptic priest who is in charge of the Abuna Yemata church.

Now, not only priests climb their way to the church in the cliff. It’s now Ngisti’s turn. Her new son, Dawit, is 40 days old, and it’s time for him to get baptized. Watch the short documentary clip below to witness what the BBC has labeled as “the most extreme baptism.”