Tens of thousands of Irish march to save pro-life amendment 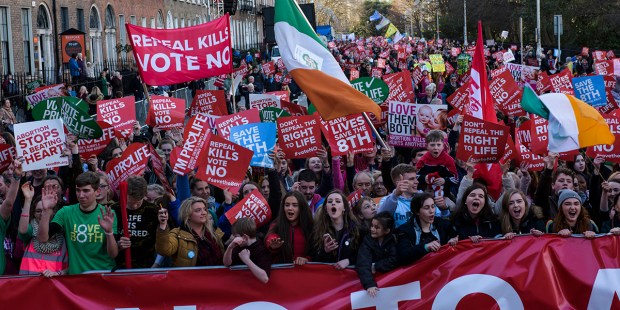 Meanwhile, pro-choice group calls on expats to return home to vote for abortion

Maureen O’Leary was among 48 people who traveled by bus from Cork to Dublin Saturday morning to voice their support for the Eighth Amendment of Ireland’s Constitution, which protects the unborn. An estimated 90,000-100,000 people took part in a rally and march through the center of Dublin to affirm their support for the Eighth, ahead of a referendum in May over whether to repeal it.

“I feel [the vote] will be close,” O’Leary told the Irish Times. But I cannot understand why we were having this referendum. The right to life is non-negotiable. Once you remove the first fundamental right of a human being, no other rights matter after that.”

The March 10 rally and march, organized by the Save The Eighth campaign, was addressed by physicians, feminists, disabled persons and others.

“The basic law that governs our actions as doctors is first do no harm,” Dr. Judy Ceannt, told the crowd, according to the Irish Independent. “We are not meant to intentionally kill or harm any patient, least of all the most helpless, the unborn baby. The government has no right to impose this on us.”

A majority of Irish general practitioners in a recent survey said they would not prescribe the abortion pill.

Destiny Herndon-De La Rosa, who said she was a pro-life feminist, said abortion was “the ultimate exploitation of women, and is a symptom of women’s oppression.”

Charlie Fien, a Down syndrome activist, spoke against the targeting of Down syndrome children in the womb for abortion, the Independent said.

Save the 8th Campaign manager Niamh Ui Bhriain said that unborn babies who might be born with disabilities are at grave risk of being killed if the Eighth is repealed. She claimed that 90% of pregnancies diagnosed with Down Syndrome in Britain end in abortion.

Ireland is at risk of becoming even more liberal than the UK when it comes to abortion, Bhriain added.

In 1992, a 14-year-old rape victim was prevented from travelling to England to terminate her pregnancy, in a controversy that became known as the X Case. The Irish Supreme Court subsequently allowed the travel, and a referendum approved a further update to the constitution, stating that the Eighth Amendment did not restrict the freedom to travel to another state.

After an Indian woman, Savita Halappanavar, died in a Galway hospital after being refused an abortion, a 2013 amendment allowed abortion under certain conditions: when doctors deem that a woman is at risk of taking her life or that her life is at risk due to medical complications.

Meanwhile, the Independent reported that pro-choice “Home to Vote” campaign is calling on 40,000 Irish expatriates to return home to vote in the referendum. Ireland does not allow overseas voting. Thousands of Irish living abroad returned home to vote in the 2015 referendum allowing same-sex marriage.

A group arguing for repeal of the amendment, Together for Yes, said it wants to fight for the rights of women who must travel from Ireland to Britain for abortion.