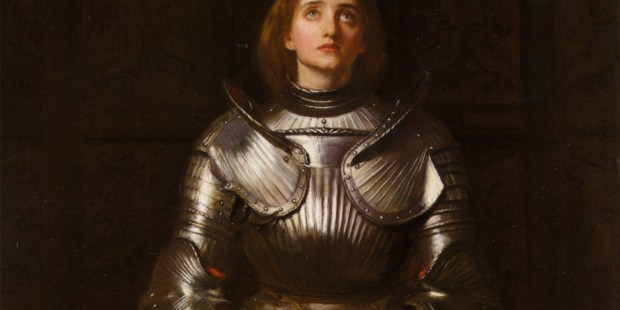 The heroine of France (and Catholic saint!) was totally epic.

When The Last Jedi came out, one of the biggest complaints was that Rey finished her Jedi training with Luke too quickly. These critics must not be familiar with the story of Joan of Arc, a young, untrained peasant girl who picked up a sword and turned the tide of the 100 Years War. Joan was a fierce warrior who won the respect of her soldiers and king through exceptional valor and faith.

These days the trope of a commoner becoming a deciding figure in a conflict has become so common in movies that it has become a cliche, but when Joan did it, she flipped the script of her time period. Here are a few ways that the story of Joan of Arc is better than anything you’ll find on the silver screen today.

Setting aside how unusual it was for a woman to fight in war, let alone command armies, Joan did the unthinkable for one of her station. An uneducated, common girl whose father was a mere farmer, she attained an audience with the dauphin, heir to the French throne Charles VII, and convinced him to allow her to address the siege on Orléans.

The city of Orléans had been surrounded for six months by English forces, yet Joan, a young girl unproven in battle, was able to lead 700 men to recapture the city in just four days. Once the area was cleared of the enemy, Charles VII was able to travel safely to Reims, where he would be crowned king.

While Charles was most likely testing the validity of Joan’s claims with a task he never expected her to achieve, her victory led him to put her in a position of authority over his armies and fight in his name during the 100 Years War. However, it is unclear to what extent Charles rested his faith on his God-sent warrior, since upon her capture the fledgling king made no attempt to see her ransomed.

2) She wore armor and fought alongside the men.

The 15th century was not a very progressive time, and a woman wearing men’s clothing was not accepted by everyone. Still she stood beside war-hardened soldiers, brandishing a blade which Encyclopedia Britannica explains was found after Joan made a prophecy:

She had her standard painted with an image of Christ in Judgment and a banner made bearing the name of Jesus. When the question of a sword was brought up, she declared that it would be found in the church of Sainte-Catherine-de-Fierbois, and one was in fact discovered there.

When she was imprisoned her captors demanded that she wear women’s clothes and she accepted this. Yet several days later she was found in her cell wearing men’s clothes once again. Historians theorize she may have just been more comfortable that way, since she was a seasoned warrior at that point, but it is also possible that her guards forced her to wear men’s clothes in order to make her seem defiant to the authorities.