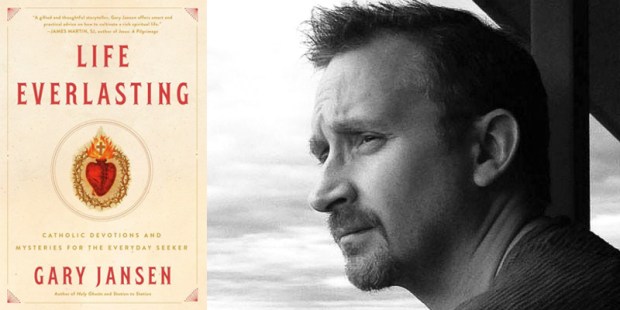 Over-intellectualizing our relationship with God is a common problem.

Do you put more of your head or your heart into your prayers?

While author Gary Jansen acknowledges that you need the right balance, he suspects that over-intellectualizing prayer is a common problem, so we need to focus more on the heart. His view is grounded in both Scripture and biology, and he suggests that we can improve our spiritual lives by practicing devotions, which can increase our trust in God and lead us to greater inner peace.

During a “Christopher Closeup” interview with me about his book, Life Everlasting: Catholic Devotions and Mysteries for the Everyday Seeker, Jansen explained that the origins of many devotions stem not from the top down hierarchy of the Church, but from a grassroots level.

He said, “[Many] originate almost from folk traditions. It could be someone who, in the first century, decided that they wanted to walk the steps that Jesus walked during the crucifixion, and we end up getting the Stations of the Cross that were developed years later … So you have common people who are inspired to develop these ways of communicating with God. In time, some of these personal spiritualities snowball, and they get bigger and bigger, like the Rosary.”

Jansen, the senior editor for the Crown Publishing Group, became devoted to devotions over the course of his own life, especially in the last 10 years. A perennial worrywart who was raised Catholic but wasn’t too steeped in the faith, he started to find some relief from his anxiety when someone introduced him to the writings of Thomas Merton. That led him to other writers like Henri Nouwen and Fulton Sheen. “The more I read what they were talking about, the more [I saw] they were dealing with their anxiety and fear and how to overcome it.”

An experience with his young son also taught Jansen a lesson about responding to fear. The two of them went to the grounds of St. Ignatius Retreat House in Long Island years ago to walk around and play. As it started getting dark, Jansen held his son’s hand as they walked, and the boy said, “Dad, don’t let go. I’m afraid.”

Jansen recalled, “It was this moment of deep connection with my son, with the world, and with God … I’ve been frightened so many times in my life, and a lot of times I don’t reach out to my Father’s hand and say, ‘Abba, help me. Hold onto me. Don’t let me go.’ When you can do that, when you can surrender your intellect [or] how you are living your life and say, ‘God, hold my hand,’ it just changes everything.”

The humility it takes to do that is part of the reason Jansen believes we sometimes need to let our hearts guide our heads. He views the Church as “a huge brain with a big heart,” but worries that over-intellectualizing prayer can keep us from reaping some of its benefits.

He explained, “There are a lot of books written about our faith, and that appeals to the intellect. You could read tons of books, but that doesn’t mean you’ll ever know anything more about God unless you have this personal experience along the way.”

That’s where devotions, Scripture, and even biology come in for Jansen: “When you think of devotions and traditions, you never see the sacred mind of Jesus; you see the Sacred Heart of Jesus. You don’t see the Immaculate Head of Mary; you see the Immaculate Heart of Mary. And when Gabriel comes to Mary and says, ‘You’re going to be the mother of God,’ she doesn’t think about this. What happens? She ponders this in her heart. In tradition, ancient people used to believe that the heart was the center of the intellect. And think about this … When a fetus is developing, the first thing to develop is the heart. That happens about 14 days after conception. Another 14 days after that, that’s when the brain starts. So the heart is sending information that creates the brain … We can over-intellectualize our faith, but having these opportunities to put the mind at ease through the power of devotion, which is through the power of heartfelt prayer and meditation, can revolutionize the way that you experience God.”

So how can people start practicing devotions? Jansen notes that you need to make the conscious and intentional decision to deepen your relationship with God — and to do the work necessary. But he also compares it to weightlifting in the sense that someone who’s never lifted weights before isn’t going to start off by bench-pressing 400 pounds. You need to start with 10 or 20 pounds and build up your muscles.

The same approach works with building your spiritual muscles. Jansen said, “Adding a little prayer into your life every day, setting aside just a few minutes every day, gives you the opportunity … One of the things that works for me … is the Most Holy Name of Jesus devotion. You repeat the name of Jesus throughout the day and allow the supernatural power of Jesus’ name, the love that is embedded in that name, what that name represents, to be on your lips throughout the day. So when you’re standing in line at the grocery store, repeat the name of Jesus over and over. It’s like thought substitution. Instead of worrying about stuff, repeat Jesus’ name. It leads to a shifting of consciousness and makes you aware that Jesus is important to me, so let me focus on Him for a few seconds. In time, this almost becomes like second nature. St. Paul said, ‘Pray ceaselessly.’ He didn’t really tell us how to do that, but I think the Devotion to the Most Holy Name is key to finding out how we can do that.”

Read more:
Litany of the Holy Names of Jesus, All Mercy

Jansen adds that the saints and angels have come to play an important role in his spiritual life, too. Drawn to saints like Ignatius and Benedict, he looks at them like “aunts and uncles and cousins and brothers and sisters. … It can be cool to sit down with an old uncle you never really met before and say, ‘Tell me a little about your life.’ He says, ‘You’re not going to believe this, but I was in the desert and fought off all these demons. I had a hard time, but in the end, God got me through it.'”

He also asks his guardian angel for help, though admits he should probably do it a lot more.

Life Everlasting explores devotions even further, but in the end, everything points towards Jesus being our light in the darkness.

Jansen concludes, “I try to return to that name of Jesus, to say those words and realize that I’m not alone, that Jesus is here with me all the time. It can be difficult sometimes to feel a deep experience, but keep pushing. [It’s] like when you’re working out or you’re on a diet, you might not see any kind of effect going on. But the more you eat healthy and the more you exercise, the more things are happening inside you. The more that you can evoke the name of Jesus in your life, the more things are happening inside you to help alleviate that darkness.”

To listen to my full interview with Gary Jansen, click on the podcast below: