‘Pope Francis- A Man of His Word: A first taste of Wim Wenders’ new documentary film 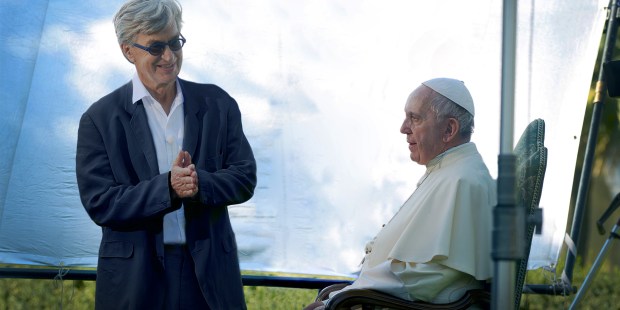 The director was granted unprecedented access to the pope. Watch the trailer here.

Three-time Oscar-nominated director Wim Wenders’ new documentary Pope Francis- A Man of His Word, which will open in United States theaters on May 18, 2018, is intended to be a “personal journey with Pope Francis” rather than a documentary about his life.

The film is the result of collaboration between the director and the Vatican, and is the fulfillment of a wish of Msgr. Dario Edoardo Viganò, Prefect of the Secretariat for Communication of the Holy See, to make a movie that would highlight the Pope’s ideas and message of compassion and concern for all.

Granted unprecedented access to the Pope, Wenders used a film technique that takes viewers face-to-face with pope, allowing the viewer to enter into a dialogue with the Holy Father about the challenges of the world and the Church’s response to them.

Throughout the film, Pope Francis responds to questions from farmers, workers, refugees, children, the elderly, prisoners, and the poor. Through this dialogue, the pope communicates, in a personal way, his concern for the poor, his commitment to environmental issues and social justice, and his appeal for peace and dialogue between religions.

“Pope Francis is a living example of a man who stands for what he says,” Wenders said last year. “Through the full cooperation of the Vatican, we were privileged to have several long audiences with Pope Francis, and Focus now joins us in bringing his radical compassion and deep humanism to an audience around the globe.”

Read more:
Why is Wim Wenders making a movie about Pope Francis?

The film follows the pope as he shares his vision with the world, traveling across the globe to address the United Nations and the US Congress, visit Ground Zero, the Holy Land, Africa, South America and Asia.

Produced by Focus Features, the studio behind the critically acclaimed films The Pianist, Eternal Sunshine of the Spotless Mind, and A Serious Man, the film aspires to engage a global audience to introduce the world to the ideas of Pope Francis.