The long-lost remains of St. Edmund might be found under tennis courts in East England 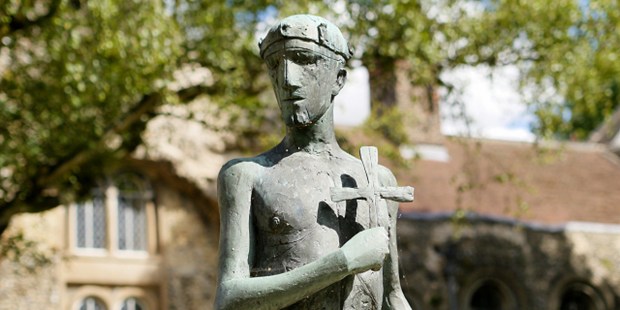 Bury St. Edmunds gets permission to dig for relics.

Historic England, the agency that protects historic places in the U.K., has granted permission for tennis courts on the grounds of an ancient abbey to be relocated so that archaeologists can search for the remains of St. Edmund, the BBC reported.

England’s former patron saint, who ruled the Anglo-Saxon realm of East Anglia between 855 and 869, is thought to have been captured and killed by Danish or Viking raiders in 869. According to the East Anglian Daily Times, his remains were kept in a shrine in Bury. But the Benedictine Abbey there was dissolved during King Henry VIII’s reign, and Edmund’s remains were lost. Academic researcher Francis Young, who was born in Bury, said that according to a third-hand account from 1697, St Edmund was placed in an iron chest by monks, but the account does not give a location in the Abbey precincts where he was buried.

Robert Everitt, St Edmundsbury’s cabinet member for communities, said it would be an “incredibly important historical discovery” if St. Edmund were found under the tennis courts.

According to the Catholic Encyclopedia, Edmund was crowned at about age 15 in 855 and proved a model ruler and a man of prayer, “anxious to treat all with equal justice, and closing his ears to flatterers and untrustworthy informers”:

In 870 he bravely repulsed the two Danish chiefs Hinguar and Hubba who had invaded his dominions. They soon returned with overwhelming numbers, and pressed terms upon him which as a Christian he felt bound to refuse. In his desire to avert a fruitless massacre, he disbanded his troops and himself retired towards Framlingham; on the way he fell into the hands of the invaders. Having loaded him with chains, his captors conducted him to Hinguar, whose impious demands he again rejected, declaring his religion dearer to him than his life. His martyrdom took place in 870 at Hoxne in Suffolk. After beating him with cudgels, the Danes tied him to a tree, and cruelly tore his flesh with whips. Throughout these tortures Edmund continued to call upon the name of Jesus, until at last, exasperated by his constancy, his enemies began to discharge arrows at him. This cruel sport was continued until his body had the appearance of a porcupine, when Hinguar commanded his head to be struck off. From his first burial-place at Hoxne his relics were removed in the tenth century to Beodricsworth, since called St. Edmundsbury, where arose the famous abbey of that name.

The East Anglian Daily Times adds that according to legend, Edmund’s followers were able to find his head after a wolf called to them, shouting “here, here, here.”